The Murder of Napoleon (s6)

Chief Christopher "Chris" Scott, serving as the Agency Chief of T.I.M.E., was murdered in Back to the Future (Case #16 of Travel in Time). His death was undone with the restoration of the original timeline in Time's Up (Case #31 of Travel in Time), where he thus appeared as a quasi-suspect.

65 years old as of 2029, Chief Scott has trained as a theoretical physicist and nuclear researcher prior to his transfer to T.I.M.E.. He has long gray hair and facial hair, as well as brown eyes. He wears a blue-and-gold police uniform suit with a golden triangle insignia embedded, all of which were over a blue shirt and a white tie. He also sports smart glasses over his right eye.

A potential result of his past profession, he is more skilled with numbers than he is with words. Friendly, intelligent, yet he is absent-minded, Chief Scott likes intellectual puzzles and quiz shows on TV. He also plays the ukulele.

At the time of his death in altered 2029, his beard had grown longer. He wore a brown suit with a blue shirt over a white T-shirt, as well as brown pants and dark blue shoes.

The Murder of Napoleon

Chief Scott welcomed and introduced the team to the player. He then informed the player to a time disturbance in 1804 Paris, where Jack was waiting for them.

In the altered timeline, Chief Scott was found dead by the team in his apartment, his throat slashed. Due to the situation of the team being fugitives, Janis autopsied his body in his apartment kitchen, where she confirmed that the Chief had his throat slashed with an electric knife found near his body. She then revealed that she discovered traces of a carbonated drink splashed by the killer in the wound. After she cross-referenced many fizzy drinks, she was able to confirm that the killer spilled Rocket Sphinx on the throat wound. This meant the killer drank Rocket Sphinx.

After the team confirmed the electric knife they found as the murder weapon, the player collected a sample from the electric knife and sent it to Theo. Theo, who had made his lab in the victim's bathroom, revealed that the sample was a mixture of beeswax and tallow, primary ingredients of leather conditioner for crocodile skin. Crocodiles were considered sacred to the Egyptians; therefore, it must've been a symbol of power in New Cairo. As the killer smudged their conditioner on the murder weapon, it meant the killer wore crocodile skin shoes.

Chief Scott was fired from a research institute because he started researching particle physics due to him being convinced that time travel was possible. Since Anna Blanchard was his assistant, she was fired as well, resulting in her homelessness. He became a recluse afterward, eventually receiving the team's letter from New York, 1969, which made him sure that time travel was possible and grow paranoid of the world. When confronted by his brother, Emmett, over his paranoia, the two had a huge argument. The Chief's landlord, Abrax Tiakken, spied on him, claiming him to be a misfit although he had no proof that the Chief was breaking the law. The Chief had taxi driver Lenny Saunders drive him to strange places with shady individuals, angering him due to his awareness of his safety, and broke off his relationship with his neighbor, Rehema Tamun.

The killer turned out to be Abrax.

Upon admitting to the murder, Abrax said that the Ptolemy Dynasty ordered him to kill Scott since he was considered a subversive element. Devoted to the regime, Abrax slit the Chief's throat with an electric knife. Upon recognizing them as wanted outlaws, Abrax tried to capture the team at knifepoint but Kai put him in a chokehold, knocking him out and allowing the team to tie him up.

Abrax would be later left behind in the Chief's apartment bathroom tied up to be later discovered by the government.

The team later found out that Scott was corresponding with the resistance, an organization determined to overthrow the Dynasty after receiving the letter from 1969. This might be the reason why the Ptolemys considered him as a subversive element, apart from him researching time travel technology. 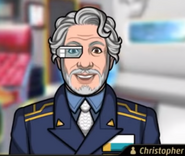 Chief Scott, as he appeared in The Murder of Napoleon (Criminal Case: Travel in Time-exclusive). 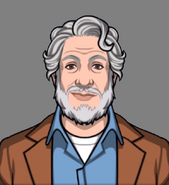 Chief Scott in the altered timeline, as he appeared in Back to the Future (Case #16 of Travel in Time). 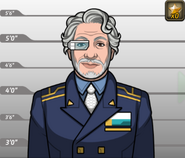 Chief Scott, as he appeared in Time's Up (Case #31 of Travel in Time). 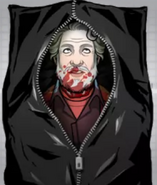 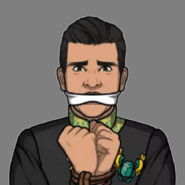 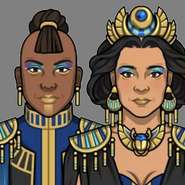 Ramses XLIII and Shabaka, the masterminds behind Chief Scott's murder in the altered timeline. 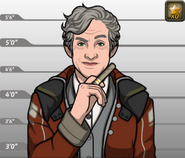 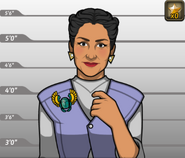 Rehema Tamun, Chief Scott's ex-girlfriend in the altered timeline.
Add a photo to this gallery

Retrieved from "https://criminalcasegame.fandom.com/wiki/Christopher_Scott?oldid=534952"
Community content is available under CC-BY-SA unless otherwise noted.