Christine Ramsgate was a suspect in the murder investigation of S.A.R.A. HAZMAT specialist Trishna Joshi in To Eternity and Beyond (Case #56 of The Conspiracy).

Christine is the 35-year-old head of the Space and Aeronautics Research Agency (S.A.R.A.), succeeding the late Denise Daniels. She has long wavy blonde hair parted to her left and holds a brown clipboard in her left hand. She wears a white buttoned-up blouse with a frilly collar under a maroon pantsuit. Additionally, she sports red lipstick and matching nails, as well as a blue S.A.R.A. badge pinned to her right lapel. It is known that Christine has read 3001: A Space Audacity, rides a LegAway and eats gluten-free sandwiches.

Christine became a suspect after Gloria and the player learned (per S.A.R.A. head Denise Daniels) that she was the chief of staff at S.A.R.A. When informed about the murder, she told the team that the victim was an asset to S.A.R.A. and was a genuine, kind person. She told the team that Trishna would be sorely missed.

Christine was spoken to again about her destroyed jacket. She explained that, on the way to an important meeting the day before, she had been sprayed with chemicals by the victim, destroying her jacket. She then wrote an angry message to Trishna, demanding that she paid for the damage.

Christine was found to be innocent after the team incarcerated John C. Birk for Trishna's murder. After Denise went missing, Christine informed Jones and the player that Denise had canceled her entire afternoon and was off for the day. When she checked Denise's office, she found that everything had been cleared out. She then excused herself to maintain order at S.A.R.A.

After Denise's death at the hands of her own murderous creations, the team said that Christine had replaced Denise as the head of S.A.R.A. Under her direction, S.A.R.A. assisted at the clearing of the former site of the DreamLife dome. Christine was also working to restore the public's faith in S.A.R.A. after the heinous crimes performed by their former head, her assistant, as well as the agency's lawyer were exposed. 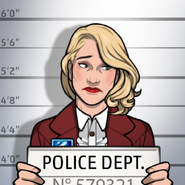 Retrieved from "https://criminalcasegame.fandom.com/wiki/Christine_Ramsgate?oldid=474186"
Community content is available under CC-BY-SA unless otherwise noted.