Chris McCoy was a suspect in the murder investigation of Chief King's old friend, Stuart Huckabee, in A Brave New World (Case #52 of Grimsborough).

Chris is a 32-year-old ash copper haired garbage collector. He wears a black and white striped shirt with a yellow and red overwear. He holds a garbage collector stick which has a soda can on it. It is known that Chris eats oysters, uses a metal detector and drinks tea.

During the murder investigation of Stuart Huckabee, Jones found a sculpture which read, "The Huckabees will forever be the sworn enemies of the McCoys". Alex determined it was made by Duncan McCoy, the Pilgrim ship's carpenter. The family feud between the McCoys and the Huckabees persisted since colonial Grimsborough, prompting the team to speak to Duncan's descendant, Chris McCoy. Chris was the prime suspect since he hated Stuart and all the Huckabees, and he was also happy about the fact that Stuart was no more.

Afterwards, the team found an ancient parchment, which revealed that Duncan was put in trial by Reginald Huckabee for cannibalism, sentencing the whole McCoy family to a life of poverty. The team needed more answers and thus decided to speak to Chris again. Chris got angry when the team spoke to him about this since the whole city now knew about this incident because of Stuart. Chris told the team that it was freezing cold back in 1642 and people were dying of hunger. It was eat or die and all Duncan wanted was try to survive. Officer Jones asked Chris if Duncan ate a child, and Chris angrily replied and said that Duncan ate an old man who was going to die anyway. Chris was found innocent at the climax of the case in spite of his family's ongoing hatred against the Huckabee family. 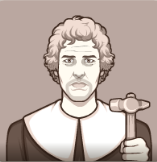 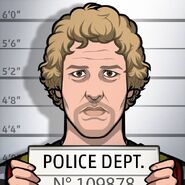 Retrieved from "https://criminalcasegame.fandom.com/wiki/Chris_McCoy?oldid=408129"
Community content is available under CC-BY-SA unless otherwise noted.