Chon is a 35-year-old bookmaker. He has chin-length black hair underneath a green visor with several papers tucking from it. He wears a long-sleeved green shirt with the buttons undone and a wad of cash in his left pocket. He also wears stripes-patterned glasses and has a tattoo of a tiger on his chest. It is known that Chon is physically fit, takes vitamins and eats lemongrass.

Chon became a suspect after Jack and the player found his notebook detailing the betting odds for the match between the victim and Baxter Fraser, and that the victim would win. He was surprised to hear of Thanid's death, saying the odds of him dying on the day of his title defense were huge. Though he said he was going to miss him, only for the amount of successful bets he made on him. He was just as sure as before that Thanid was successfully going to win his match against Baxter, hoping to make a lot of money up of it.

Chon was interrogated again about his apparent bets he put against the victim, despite saying he normally bets on Thanid. Chon said he bet against Thanid mostly for his intuition and looking past the numbers. He was aware of the victim's bad habits of drinking, partying, and never training, and felt that his glory day were beginning to fade. Since the victim was not looking after himself, Chon felt it was only a matter of time before Thanid lost his edge and his title.

In the end, Chon was revealed to be the killer of Thanid. After denying involvement, Chon admitted he strangled Thanid with the latter's mongkol after he refused to intentionally lose his fight against Baxter Fraser, violating their agreement in which Chon would bet for Thanid’s defeat and then give him part of the profits. Judge Adaku sentenced him to 20 years in prison. 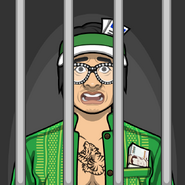 Chon, sentenced to 20 years in jail for the murder of Thanid Tongproh. 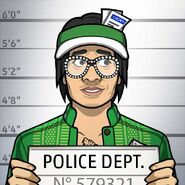 Retrieved from "https://criminalcasegame.fandom.com/wiki/Chon_Sansurin?oldid=516838"
Community content is available under CC-BY-SA unless otherwise noted.