Chester Holt was a suspect in the murder investigation of Judge Satoshi Takakura in The New Truth! (Case #55 of Mysteries of the Past).

Chester is a 41-year-old milkman. He has ginger hair, freckles, and a scar above his right eyebrow. He dons brown overalls over a white shirt with brown buttons and a gold tag with "MILKMAN" on it. Additionally, he is seen holding a milk bottle in his right hand. It is known that Chester smokes, reads The New Truth and takes a sleeping draught.

Chester became a suspect after Maddie and the player found his threat to Takakura, which demanded that Takakura paid him. He assured them that the threat was nothing to be concerned about and that he was only demanding money that he was owed for his milk deliveries. He told them that Takakura was always late with the payment and that he needed the money for cigarettes and the newspaper. When he was informed of the murder, he denied any involvement.

Chester was spoken to again about a newspaper which revealed that he was a released convict who had been sentenced by the victim. He told them that times were hard for people who didn't have a clean record under Mayor Lawson's regime. Despite pledging that he was a changed man, he was irritated that nobody would ever believe him. When asked if he expected them to believe that it was a coincidence that he delivered milk to the judge who sent him to prison, he swore to them that it was the truth and said that he didn't blame Takakura for doing his job.

Chester was found to be innocent when the team incarcerated Florence Samuels for Takakura's murder. 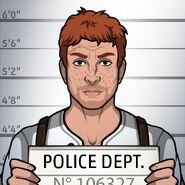 Retrieved from "https://criminalcasegame.fandom.com/wiki/Chester_Holt?oldid=415453"
Community content is available under CC-BY-SA unless otherwise noted.