Charlotte Webb was a suspect in the murder investigation of Sheriff Roy Loukas in Like a Pig to the Slaughter (Case #46 of The Conspiracy).

Charlotte is a 54-year-old worker of a slaughterhouse with brown eyes and blonde hair adorned with a pink ribbon. She is seen wearing a pink blouse underneath a white coat with two front pockets, a logo of a pig and bloodstains. Additionally, her name is sewn on her coat's left front pocket. Furthermore, she sports blue eyeshadow, a heart necklace, red nail polish, a missing tooth and is seen holding a bloody cleaver. It is known that Charlotte eats bacon, reads Animal Farm and uses a mud mask.

Charlotte became a suspect after Jones and the player found the pig figurine she had gifted to the victim. Realizing that the team were there to discuss the murder, she told them that she would miss Roy and felt safe living next door to him. When asked about the choice of gift, she explained that it was a joke between neighbors and that she was obsessed with pigs. She admitted that she had the skill to slice him up, but denied doing so.

Charlotte was spoken to again about the wanted poster she had created of the victim. She revealed that the victim would often call her names, such as "Miss Piggy," and often teased her. She explained that she had been bullied all of her life and didn't need the grief the victim was giving her.

Charlotte was found to be innocent after the team incarcerated Lorenzo Sims for Roy's murder. 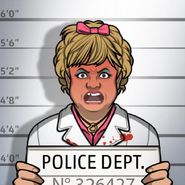 Retrieved from "https://criminalcasegame.fandom.com/wiki/Charlotte_Webb?oldid=452505"
Community content is available under CC-BY-SA unless otherwise noted.