Charlotte Jones, appearing as a minor character in Criminal Case, was mentioned during the events of multiple cases in Grimsborough and The Conspiracy.

Charlotte is a green-eyed, blonde-haired woman. She happens to be the ex-wife of Jones, a detective who works for the Grimsborough Police Department. She can be seen wearing a red shirt in a photo of herself and Jones.

Charlotte played a mere role as being the divorced wife of Jones throughout the player's journey in Grimsborough. During the events of Death by Crucifixion, Jones mentioned that she wanted him to see a psychologist to help him deal with the stress of his job. Charlotte could not handle the risk his job entailed and eventually divorced him. 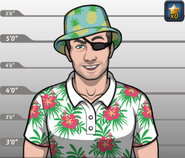 David Jones, Charlotte's ex-husband.
Add a photo to this gallery

Retrieved from "https://criminalcasegame.fandom.com/wiki/Charlotte_Jones?oldid=546152"
Community content is available under CC-BY-SA unless otherwise noted.