Charlene Cody was a suspect in the murder investigation of high schooler Abigail Price in Good Girls Don't Die (Case #48 of Grimsborough).

Charlene is a 28-year-old beautician who wears a standard beautician uniform with scissors and a pink manicure stick in her shirt pocket. Charlene has blonde hair with a pink hairband decorated with a daisy. It is known that Charlene is in contact with talc and wears heels.

Later, the team found a cell phone belonging to Charlene that had been used to send nasty text messages to Abigail and other people, and thus, the team interrogated Charlene a second time regarding about those text messages. Charlene did not mean to say anything nasty about Abigail but while Charlene would not murder people to risk her career, she hated the revelation of having to put up with young affluent high school girls and doing the beauty work for them. Grace placed Charlene in the red for what she said about Abigail.

After time, Abigail's best friend, Sabrina Kingston, was revealed to be her killer and Charlene was proved innocent. After Sabrina's arrest, the team went to check up on Charlene in the Additional Investigation.

Charlene had an allergy and asked the team to have a look at the treatment room to see which cosmetic she used made her get allergy. The team investigated the treatment room and found a bottle which had a faded card. After examining the card, the team found out that the bottle was a sauce product. So the team went to ask Charlene about the product. Charlene said that she was eating Chinese food. And after seeing the bottle, she just thought it was a cosmetic product. She was also scared that she would have given that product to her costumers. 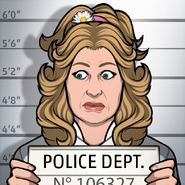 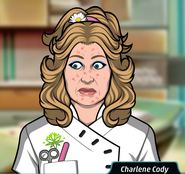 Charlene, as she appeared in the Additional Investigation, suffering from an allergic reaction.
Add a photo to this gallery

Retrieved from "https://criminalcasegame.fandom.com/wiki/Charlene_Cody?oldid=408103"
Community content is available under CC-BY-SA unless otherwise noted.