Criminal Case (mentioned)
Celia Barnes, appearing as a minor character in Criminal Case, was mentioned during the events of Slayer's End (Case #24 of Mysteries of the Past).

Celia was a 21-year-old prostitute who died of syphilis. She had curly brown hair and green eyes and wore a white shirt at the time of her death.

Maddie and the player found her picture in Fiona Flanagan's hideout. Upon her identification, they found out from her death certificate issued by Barnaby Wilson that she had died due to syphilis at the age of 21 and that she was a prostitute. They talked to harlot Adrienna Brassiere about her. Adrienna said that Fiona took Celia under her wing after she became fond of her. Fiona then paid for a doctor to visit when Celia got sick and stayed by her bedside until she died. Fiona then disappeared and came back more quiet than before. Adrienna noted that this was probably the time that she started murdering prostitutes. 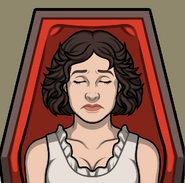 Celia's body.
Add a photo to this gallery

Retrieved from "https://criminalcasegame.fandom.com/wiki/Celia_Barnes?oldid=408117"
Community content is available under CC-BY-SA unless otherwise noted.