Celeste Masters was a suspect in the murder investigation of family doctor Greg Gibbs in Flatline (Case #7 of The Conspiracy).

Celeste is a 47-year-old morphine addict. She has messy, mid-length black hair and wears a red jumper over a white collared shirt. She additionally sports crimson lipstick, a yellow GritFit wristband on her right wrist, and a gold bead necklace. Furthermore, she holds her phone in her right hand, and has a beauty spot above her lip. It is known that Celeste is left-handed, smokes electronic cigarettes and uses FilterPix.

Celeste became a suspect after Gloria and the player discovered that she had messaged the victim on his pager. She explained to them that she was desperate for the victim to help her daughter, who was gravely ill. After being informed of the murder, she turned frantic and questioned what she would do without him.

Celeste was spoken to again about her attempt to steal morphine from the victim's clinic. Despite Gloria initially thinking that she had stolen the morphine for her daughter, Celeste slipped up and revealed that she had tried to steal the medicine for herself as she was addicted to morphine. She told them that her daughter had undergone a series of operations the year prior, and after she recovered, some of the morphine remained. Celeste then started to take the drugs as her life had been turned upside down, and before she knew it, she was addicted. Gloria then arrested Celeste for breaking and entering.

Celeste was found to be innocent after the team incarcerated Richard Harding for Greg's murder, but still remained in custody. 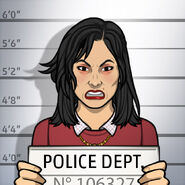 Retrieved from "https://criminalcasegame.fandom.com/wiki/Celeste_Masters?oldid=430213"
Community content is available under CC-BY-SA unless otherwise noted.