Cedric is a 41-year-old sommelier with blond hair and blue eyes. He is seen wearing a formal white shirt and a green tie under a black apron with a gold grape brooch on it. Additionally, he sports diamond-shaped cufflinks and holds a glass of wine in his right hand. It is known that Cedric has been to Provence and eats figs.

Cedric became a suspect after Jones and the player learned that he worked at the victim's villa. He explained that he had taken out the wine barrel the victim had been drowned in for a wine-tasting session, but assured them that the lid had been shut tight on the barrel. He revealed that he had last seen the victim in her living room in the morning, prompting the team to investigate the living room.

Cedric was spoken to again about his anger toward the victim after he got into an argument with Martine. He told them that the victim constantly argued with him about wine, and her sacrilegious declarations had to be stopped. Jones then suggested that Cedric drowned Cora in the barrel of wine, which he brushed off as a waste of wine.

Cedric was found to be innocent after the team incarcerated Jacinta Linares for Cora's murder. He was later approached by Sofia Quadrelli and the player for wine for Sofia's reunion with Gabriel, her boyfriend. Cedric then suggested finding a bottle of the 2012 vintage of Villa Bateman's rosé wine. This prompted Sofia and the player to search the villa for a bottle of the wine.

Amir and the player decided to spy on the conversation between the two Ad Astrans, Joe Warren and Christian. To do so, they disguised as waiters in the villa. Cedric encountered the two, wherein he told them to take a tray of champagne and make the rounds. After Amir referred to him as a "chef", Cedric angrily told them he was a sommelier before telling them once again to make the rounds and leaving. 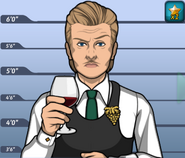 Cedric, as he appeared in In Vino Veritas (Case #47 of The Conspiracy).

Cedric, as he appeared in Dearly Departured (Case #49 of The Conspiracy). 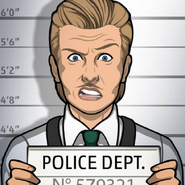 Retrieved from "https://criminalcasegame.fandom.com/wiki/Cedric_Duchateau?oldid=536222"
Community content is available under CC-BY-SA unless otherwise noted.