Cecilia Carson was a suspect in the murder investigation of her cousin, hiker Marigold Carson, in Hashtag Murder (Case #8 of Supernatural Investigations).

Cecilia is the 21-year-old cousin of the victim. She has brown eyes, long black hair and a mole under her left eye. She wears a low-cut, patterned white blouse with fringe, as well as a golden circular pendant. Additionally, she sports eyeliner and ruby lipstick. It is known that Cecilia knows how to sew.

Cecilia became a suspect after Gwen and the player found her bus ticket and identified her as Marigold's cousin. Assuming the guise of detectives, Gwen and the player informed Cecilia that Marigold was dead. Shocked, she revealed that they were on a trip to Mexico, explaining that Marigold had gotten famous and wanted to get away from the spotlight. Cecilia then broke down and wondered what she would do without her cousin.

Cecilia was spoken to again about her defacing Marigold's magazine cover. She explained that she was really looking forward to their trip to Mexico. However, instead of beaches, they had ended up at the Island of the Dolls, which had freaked Cecilia out. She then got into a massive argument with Marigold and ran off.

Cecilia was found to be innocent after the team incarcerated Tiffany for Marigold's murder. 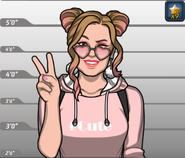 Retrieved from "https://criminalcasegame.fandom.com/wiki/Cecilia_Carson?oldid=515763"
Community content is available under CC-BY-SA unless otherwise noted.