Catherine is a 59-year-old therapist working for DreamLife. She has mid-length, graying-black hair, orange nail polish, and holds a pen in her right hand and a notepad in her left. She wears a gray long-sleeved shirt and a turquoise scarf. Furthermore, she sports small gold and red earrings. It is known that Catherine knows how to fight, takes sleeping pills and is right-handed.

After arresting Fred Drucker's killer, Gloria and the player spoke to her about Kai Gruber, a former DreamLife scientist who was interned in the Bromden Psychiatric Hospital. There, Catherine told the team to ask Kai himself about what led him to be interned. She also suggested the team take a lava lamp from the recreation room because it was the only thing that kept him calm.

Catherine became a suspect after Jones and the player found her fingerprints on the book User 404, which was in Rupert's workspace. After deciding to investigate the murder as Mortimer Pickering's murder instead of Rupert's in order not to attract her suspicion, the team came to asked her about her connection to Rupert. When being asked about the book she gave to Rupert, Catherine said that she had recommended the book to him in order to make him open up to her. However, Rupert still kept his distance. Catherine then told the team that if he had come to her, the murder would not have happened.

Catherine was spoken to again after the team found a message, which she left to Rupert, yelling at him to come and see her. The team then came to ask Catherine to find the reason why she was mad at Rupert. Answering about this, Catherine explained that Rupert kept cancelling her therapy sessions, which made her under a lot of stress. At the end of the conversation, Jones hoped that the stress did not bring her to any rash actions.

However, after collecting enough evidence, the team found out that Catherine was Rupert's killer. Admitting to the murder, Catherine said that she had dated the real Pickering in Oxford, making her grow suspicious when the "Pickering" who came to the dome did not remember her. When she remembered Pickering used to switch places with Rupert, she went to Rupert's bedroom to confront him, where she caught him talking to his watch. Furious at his "betrayal" of DreamLife, she tore off his fake beard and sprayed him with lethal gas, allowing him to exit the dome before succumbing to the effects of the poison. Judge Powell sentenced her to life in prison. 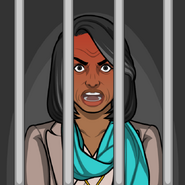 Catherine, sentenced to life in prison for the murder of Rupert Winchester. 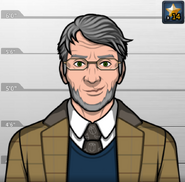 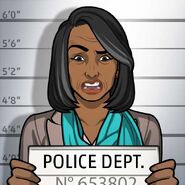 Retrieved from "https://criminalcasegame.fandom.com/wiki/Catherine_Kelly?oldid=467421"
Community content is available under CC-BY-SA unless otherwise noted.