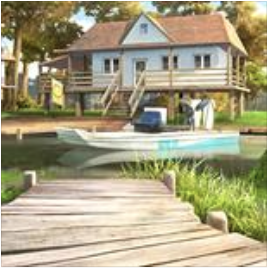 Bayou Bleu is the second district of the city of Pacific Bay and will feature Cases #6-#10 of Pacific Bay. According to Chief Marquez, the district features swamps, grasslands, and country-themed sceneries. The district was announced to those who finished The Ice Queen in Ocean Shore and Case #6 will be released on or after April 24th, 2014.