Joan is a 38-year-old bounty hunter. She has braided black hair and wears a brown hat. She dons a torn brown coat with tassels over a red and white dress. She wears a white scarf, an orange belt, and an ammunition belt. Additionally, she is seen carrying a rifle.

In her first appearance, it is known that Joan chews tobacco.

In her second appearance, it is discovered that she drinks whiskey punch and likes Buffalo Bill.

Joan became a suspect after the player and Maddie found a wanted poster with her name on it, saying she brought a prisoner in. When they approached her, she held her gun up to them, but once they explained they were from the Concordian Flying Squad, Joan settled down. When asked if she knew the victim, Joan said she brought in quite a number of prisoners, but did not know Kev.

Joan was spoken to again about a news article saying she brutally beat a Stonewall convict, making her suspicious considering how Kev was killed. She acknowledged she beat him up, but felt it was not that big of a deal. When asked if she would do the same to Kev if he got on her nerves, Joan got angry saying she did not have to explain herself to them. She added that people like Kev are hardened criminals, who only understand violence.

Joan was found to be innocent after the team incarcerated Jeremiah Shankshaw for Kev's murder. After his trial, Joan showed up at the Flying Squad's HG, saying she has dirt on Rose. The player and Isaac decided to see what she had to say, and she explained that one time when she was a bounty hunter, Rose beat a man into confessing a crime he did not commit. It was ten years ago, Rose had beaten a certain Randolf Watson to a pulp, then dragged him to court where he confessed to killing his brother Theodore Watson. However, Joan believed Randolf was innocent, given that there was no evidence, and that Rose did it all for financial gain. As for why she told them, she said they had to get their own house in order before accusing other people, so they decided to check the mines where the murder took place to see if there is any truth to Joan's accusation.

Joan became a suspect again after Maddie and the player found a signed Buffalo Bill addressed to her. She was in town after hearing about the trial against Vittorio and wanted to see it herself, but was surprised to hear that their witness was murdered. Though Joan was looking forward to the trial, she doubted it would work given how tough it has been to catch Vittorio.

Joan was spoken to again about an article in her journal headlining the death of a sheriff at the hands of one Giovanni Costa, the victim's father who the team discovered back in New Haven. She said she did not kill Vinnie, but wanted to out of revenge for the sheriff his father murdered, who Joan considered a close friend. Her journal only ended up in Vinnie's room because she was there before she was cleared out to make room for Vinnie, and she forgot her stuff in the process. But even with that, Joan claimed someone else got to Vinnie before she did, and claimed the team was barking up the wrong tree with her.

Joan was revealed to be innocent again after the team incarcerated Clay Westwood for Vinnie's murder. Later on, Rose recruited her help for a gunfight against Vittorio and his gang, so they set aside their differences to face him. 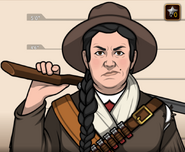 Joan, as she appeared in Death Without Parole (Case #25 of Mysteries of the Past). 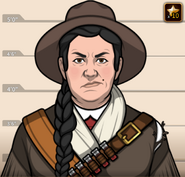 Joan, as she appeared in Blood Bath (Case #29 of Mysteries of the Past). 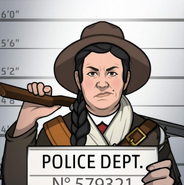 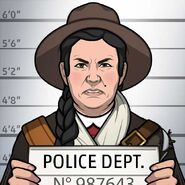 Retrieved from "https://criminalcasegame.fandom.com/wiki/Catastrophe_Joan?oldid=517974"
Community content is available under CC-BY-SA unless otherwise noted.