Caroline is 46 years old and the president of an Anti-Bullying association, a bus monitor, and the prom ball chaperone. She has auburn, wavy, medium length hair which curls back at the shoulders. She has light blue eyes and wears diamond stud earrings. She also wears dark red lipstick and a beaded necklace around her neck. Caroline is seen in a white sweater with a cross stretching down it. In the middle of the cross, there is a golden button.

In her first appearance, it is known that Caroline drinks coffee, uses Friendnet and watched The Hangman Murders.

In her third appearance, Caroline is seen wearing a blue dress.

Caroline was interrogated after Jones and the player found her phone number scribbled on an anti-bullying pamphlet inside Lisa Edwards' portfolio. She told the team that she knew Lisa was in trouble for some reason, and as the president of the Anti-Bullying association, she had given Lisa her phone number in case she ever needed help, but the victim never called her. Caroline was later called in again after the team discovered that she had written many emails to Lisa to ask her for participating in a conference about cyberbulling, and when Lisa refused, Caroline started to bully the victim by mailing her that she should have been ashamed and that she was being selfish. When questioned about this, Caroline replied and said that she did not bully Lisa and that she would never bully anyone no matter what the circumstance was. She then claimed that her mails to Lisa were strictly professional and that she was very disappointed when the victim declined her offer.

Caroline then returned to be interrogated in when the team found the victim's cellphone at the child's bedroom of the Mills residence. Caroline was called when the team discovered that she was the last person whom the au pair called prior to her demise. All Caroline knew was that Irina was present at a school bus one morning, and she called her wondering whether or not Caroline was going to be monitoring buses for the day. Caroline claimed that Irina had to endure horrible gossip of husband stealing, gold-digging, and domestic jealousy. Caroline was interrogated a second time after the team found a letter written in Russian, in which Alex deduced the letter to be troublesome—in which Irina was asked to resign as Sarah's au pair, but also wanted to expose the truth about her secret lover. The team was agitated that Caroline withheld information from them but Caroline promised Irina that she would not expose any sensitive information to the public—in this case, relationships with other people.

Madison Springer's sudden end was more than enough to cause emotional anxiety and trauma all over the University, with Caroline suffering extreme cases of breakdowns and anguish from Madison's untimely end. Caroline stated that the ball was a mistake since all of the buffet was free for a murder and they took advantage of it. Jones then said that she was not the only one upset but all of them were also upset, but there was nothing anybody could do to stop the tragedy. Caroline countered by stating that the tragedy would have been prevented if they listened to her in the first place. Then also she said that one of the only persons who had the students' safety to heart, Bryan Vigman ended up being locked up by them, this made Jones conscious that why would she call it safety since he murdered a student. Caroline then said that at least he took measures to keep the students indoors, to keep them under control, and said that this was what the University really needed. Caroline then suddenly appeared when the team had just finished investigating Donna Walker's office. She was clutching the parts of a bomb and gave it to the team after explaining to them that she had found it on Donna's desk and that when she heard the foot steps of the team, she got scared and hid herself. After the conversation was over, Jones suspected Caroline of attempting to frame Donna by placing the parts of the bomb on her desk. However, Caroline was released when Tess Goodwin was convicted of the murder. 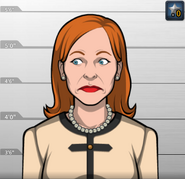 Caroline, as she appeared in At the End of the Rope (Case #35 of Grimsborough). 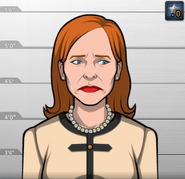 Caroline, as she appeared in An Elementary Murder (Case #40 of Grimsborough). 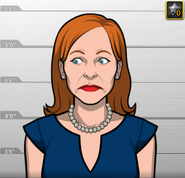 Caroline, as she appeared in The Rorschach Reaper (Case #41 of Grimsborough). 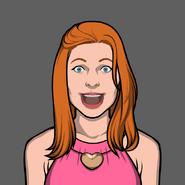 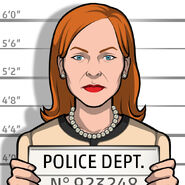 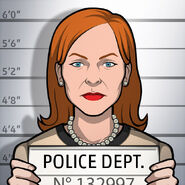 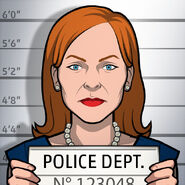 Retrieved from "https://criminalcasegame.fandom.com/wiki/Caroline_Fitzgerald?oldid=501343"
Community content is available under CC-BY-SA unless otherwise noted.