Caroline Crane, appearing as a minor character in Criminal Case, was mentioned during the events of Dead Carpet (Case #38 of Pacific Bay).

Caroline is deceased. An enigmatic woman with blue eyes and dark blonde hair, she was the wife of zealous Utopian, Jupiter Crane and the mother of PBPD profiler Russell Crane.

During the murder investigation of movie producer Tyler Snakes, the police team of Amy and the player managed to find an intriguing photograph on the crime scene. While inspecting the photo in hopes of identifying the woman on it, the two were interrupted by a surprised Russell. Russell revealed the woman to be his late mother Caroline, before suggesting the team to question Jupiter as to how that photo ended up on a crime scene.

Taking Russell's advise, Amy and the player opted to have a talk with Jupiter, who then claimed that he probably dropped the photo while having a fight with the security guard of the Ivywood Awards Theater (the crime scene's location). He also took some time to express how Caroline's death – which occurred just after Russell left home – affected his health, and how he would always carry that picture of her with him. Amy then cited the message on the photo ("I'll bring you back"), asking Jupiter if he really believed the Utopian religion could bring back the dead, to which he replied that it was his only hope. 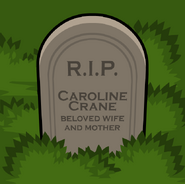 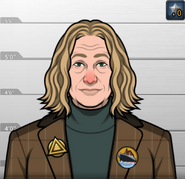 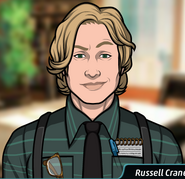 Russell Crane, Caroline's son.
Add a photo to this gallery

Retrieved from "https://criminalcasegame.fandom.com/wiki/Caroline_Crane?oldid=424100"
Community content is available under CC-BY-SA unless otherwise noted.