Carol Blanton was a suspect in the murder investigation of her son, skincare entrepreneur Beckett Blanton, in Buzz Kill (Case #16 of The Conspiracy).

Carol is the 58-year-old mother of the victim. She has frizzy graying-black hair and black eyes. She wears a pink and yellow T-shirt under a pink sweater jacket. She also wears a pair of gold hoop earrings and a bead necklace. It is known that Carol drinks kombucha and has a coloring book.

Gloria and the player went to Carol to inform her of Beckett's murder. Carol said that everybody loved Beckett and that she did not think his cheekiness would get him into real trouble. She then lamented that he would at least live through his company.

Later, Gloria and the player found security footage of Carol arguing with Beckett for not paying back her life savings that he had stolen from her two years prior to start his business. Carol said that she had encouraged his entrepreneurial dreams when he was a child, but the next thing she knew, he had already emptied her savings account without bothering to ask. Beckett swore he would pay it back, but Carol never got any compensation for it.

Carol was found innocent when the team arrested Beckett's business partner, Prisha Chandra, for the murder. 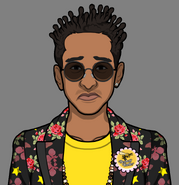 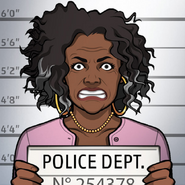 Retrieved from "https://criminalcasegame.fandom.com/wiki/Carol_Blanton?oldid=458314"
Community content is available under CC-BY-SA unless otherwise noted.