Carlton Franklin was a suspect in the murder investigation of counterfeiter Jade Carnegie in Apprehend Me If You're Able (Case #39 of Mysteries of the Past).

Carlton is the 68-year-old neighbor of the victim. He has short gray hair and a mustache. He dons a white shirt with a pastel blue handkerchief in his right pocket and brown suspenders with golden buckles. He also wears a pair of golden glasses. It is known that Carlton smokes.

Carlton became a suspect after the player and Maddie found his cat at the scene of the murder. When Maddie asked him about the victim, he said that she had been creating noise for weeks, and that the police had done nothing about it. However, when Maddie explained that she had been murdered, he was shocked and said that if he could think of anyone who would want to harm her, he would let them know.

Carlton was spoken to again about a brick that he had thrown through the victim's window. He revealed that Jade had swindled him out of his retirement fund, and that when he asked for his money back, she had played coy and said that it was all gone. When Maddie proposed that Carlton had killed the victim out of anger, he replied indignantly that he may have been upset but he wasn't a murderer.

Carlton was found to be innocent after the team incarcerated Gail Harper for Jade's murder. 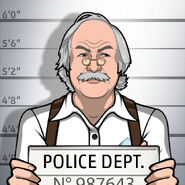 Retrieved from "https://criminalcasegame.fandom.com/wiki/Carlton_Franklin?oldid=415406"
Community content is available under CC-BY-SA unless otherwise noted.