Carlos Cachorro was a suspect in the murder investigation of assistant Penny Farrell in Bone of Contention (Case #26 of The Conspiracy).

Carlos is the 57-year-old manager of the Happy Paws dog shelter. He has grey hair and brown eyes, as well as a grey stubble. He is seen wearing a sand-beige jacket over a black shirt with a cartoon of a corgi wearing a Mexican sombrero. He also wears a gold earring on his right ear. It is known that Carlos is a vegan, likes gardening and is a runner.

Carlos became a suspect after he discovered the victim's body in his animal shelter and called to the police to report the murder. Carlos said that when the murder happened, he had gone out to call his dog food supplier for ten minutes and when he came back, he already saw Penny dead on the floor. He also revealed that Penny was a nice lady and she worked for the Mayor, which led Gloria and the player to go to the city hall and investigate the Mayor's office.

Carlos was spoken to again after the team found out that the victim filled a complaint against him for neglecting to vaccinate his dogs. He explained that he just forgot about them and it was an honest mistake. Furthermore, he revealed that he loved animals and ran with them everyday.

Carlos was found to be innocent after the team incarcerated Kitty Young for Penny's murder. 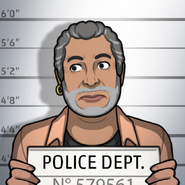 Retrieved from "https://criminalcasegame.fandom.com/wiki/Carlos_Cachorro?oldid=412742"
Community content is available under CC-BY-SA unless otherwise noted.