Captain Carl Rossa was the killer of landlord Joshua Gibson in Dead Men Tell No Tales (Case #28 of The Conspiracy).

Carl is a 52-year-old pirate and owner of the Black Sparrow pirate bar with black curly hair, green eyes, a curly beard and a mustache. He is seen wearing a navy blue double-breasted jacket with golden buttons and linings and red cuffs, along with a whitish-blue ascot underneath his jacket. He is also seen wearing a blackish-blue tricorn hat with gold linings and a blue feather pinned by a red jeweled golden pin. He is also seen wearing a black shoulder bag with a golden buckle. He is also seen holding a green apple in his left hand and with his pet parrot, Will, on his right shoulder. It is known that Carl collects antique guns, eats lobster bisque and has traveled to the Caribbean.

Carl became a suspect after Ramirez told Jones and the player that there was a pirate firing his cannon in a pirate ship moored on Doreo Drive. The team immediately came there and met Carl, who said that he fired no cannonball, it was just sound to honor the death of Joshua. The team then asked him about the victim. Carl revealed that he and the victim met at a dinner for local businessmen and he was the person to suggest him open The Black Sparrow, a bar, to boost morale in Maple Heights after the flood. He then allowed Jones and the player to search for clues on board the Sparrow and said the Sparrow is open and welcome to all visitors.

Carl was spoken to again after the team found a bottle of rum with a message which he sent to the victim. Carl then revealed that Joshua double-crossed him because he did not mention getting a cut of Carl's profits when he offered Carl moor his ship on Doreo Drive. In the end of the conversation, Carl also denied killing Joshua.

However, in the end, it was proven that Carl was Joshua's killer. After his parrot gave him away, Carl admitted that Joshua was blackmailing him for a cut of his rum sales by using an ancient maritime law that would grant him the ownership of the Black Sparrow as soon as it docked on Doreo Drive. Not wanting to lose his ship, Carl shot Joshua in the heart with a pirate gun. Judge Powell sentenced him to 15 years in jail. 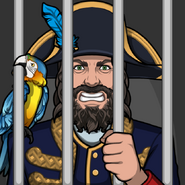 Carl, sentenced to 15 years in jail for the murder of Joshua Gibson. 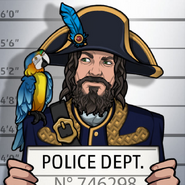 Retrieved from "https://criminalcasegame.fandom.com/wiki/Carl_Rossa?oldid=464730"
Community content is available under CC-BY-SA unless otherwise noted.