Carl Ackerman was a suspect in the murder investigation of journalist Rachel Priest in The Secret Experiments (Case #21 of Grimsborough). Prior to that, He made two minor appearances.

Carl is a 32-year-old now-former cameraman for CCN. He has light brown hair and blue eyes. He has a large goatee on his face and wears a pair of round-shaped glasses. He dons a light gray t-shirt with a badge of CCN on it and is often seen carrying a "Pony" camera on his right hand. It is known that Carl wears office shoes.

Carl became a suspect after he informed Jones and the player that Rachel was missing, who was found murdered later on, and the team did not hesitate to inform Carl about it. When asked why he did not inform them about Rachel's missing incident sooner, Carl stated that he could not tell them about it earlier as he was fired by Rachel because she did not like his camerawork. And later, Carl went to Rachel in hopes of getting his job back, but Rachel was not in sight. At first, Carl assumed Rachel was just avoiding him, but later realised that something was wrong. He also stated that he had started to get bad feelings ever since Rachel started hanging out with Drake Ribbs, an ex-military soldier, prompting the team to talk to Drake.

Later, the team found Rachel's USB stick inside a cryptex under Alden Greene's desk. When asked about it, Alden claimed that the USB stick was given to him by Carl. After being asked about it, Carl explained that Rachel's USB stick contained all of her research and most of them concerned Alden. So he took advantage of it and sold it to Alden for extra money since Rachel did not pay him well. After finding this out, Rachel fired Carl for his betrayal—exposing Carl's lies to the team in his previous conversation with them.

Carl was found innocent after Rachel's murderer turned out to be Alden Greene.

Post-trial, Carl requested the team's help to find Myriam Priest's (Rachel's grandmother) phone number (which he had unintentionally lost in a notepad) so that he could ask her to fetch Rachel's "CCN Best Reporter" trophy. The team did not hesitate to search the Grim News Headquarters and eventually found the notepad, thus giving it back to Carl, who was thankful and relieved as he wanted Rachel's prize to end up with her family. The team felt Carl did the right thing after he had wrongly sold out Rachel to Alden, feeling that Rachel could finally get the recognition and respect she deserved.

In Rachel's memory, Carl wanted the team to celebrate a meal at her favorite diner since he believed Rachel would have done the same if she was still alive. 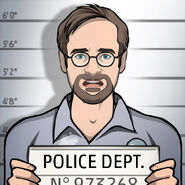 Retrieved from "https://criminalcasegame.fandom.com/wiki/Carl_Ackerman?oldid=442691"
Community content is available under CC-BY-SA unless otherwise noted.