Cardinal Salieri was a suspect in the murder investigations of Italian priest Pietro Agnelli in When Shadows Fall (Case #5 of World Edition) and book author Jacqueline Proust in The Impossible Dream (Case #6 of World Edition).

Salieri is a 70-year-old cardinal of the Catholic Church. He has white hair and facial hair. He wears a red cardinal uniform with a hat, a gold cross necklace around his neck, and a ring with a ruby on his left ring finger.

In his first appearance, it is known that Salieri drinks cappuccino, rides a scooter and knows Dante's Inferno.

In his second appearance, he is covered in multi-colored confetti and it is discovered he drinks sangria and plays chess.

Cardinal Salieri was flagged as a suspect after Carmen and the player found a bible with a message to him from the victim. He was well aware of the victim's unfortunate death and said the message was meant for him to calm his ambitions and trust in the Lord's plan for him. He called the victim an ordinary yet holy man, practicing what he preached. Salieri left shortly afterwards to make sure no one would take advantage of the church now that Pietro was dead.

Salieri was immediately spoken to after his fingerprints were found on the pope's miter. He confirmed that he tried on the miter, saying he should be the pope; not Pietro who was not afraid to show his political views. He went on to say that the victim wanted to be the pope of the people, campaigning against the referendum like a common politician. Salieri said that a regal distance must be made between the people and the pope, and he made sure to inform the victim of it.

Salieri was found to be innocent after the team incarcerated Brother Klaus but had to be spoken to again regarding his fingerprints on a floor plan of different European monuments. When Marina asked the cardinal about his fingerprints on the floor plans, he responded saying that it belonged to Brother Klaus, who gave it to him when he took his final confession before his arrest. He said that Klaus mentioned he had to visit all of Europe's monuments before coming to Italy. When Marina asked if Klaus mentioned the Promethians in regards to the floor plans, Salieri said he did not, assuming it was just a bucket list for him.

Salieri found himself in trouble again after Jack and the player found a Latin relic with a bone inside a bag belonging to the victim. Due to Dupont becoming a suspect, he could not analyze it, so it was sent off to Marina instead. She found that the relic was from the 14th century, and that the bone belonged to Catherine of Siena. The bone had reports of it being supposedly cursed, and those who remove it from its resting place would die. She pointed out it was held in a church owned by Salieri, so they spoke with him regarding the relic. He said the victim came to his church to confess her sins, then realized she took the relic when he was not looking. He also said he had nothing to do with Jacqueline's death, and that if she is dead then the curse came to life.

Salieri requested to speak with the player in The Bureau's interrogation room after the Bureau got word the referendum was reported to have been moved to the next day. He explained that he showed up because he wanted to see the murder investigation fail, and that the Promethians would be so powerful that even the Bureau would be under their control. Jack was shocked to hear a man of faith such as Salieri was a part of the cult. Salieri simply said it was God's wish for Europe, so Jack immediately took the cardinal into custody.

Salieri was found to be innocent after Archibald Gilchrist was incarcerated for killing Jacqueline and threatening thousands across Europe. 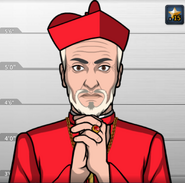 Salieri, as he appeared in When Shadows Fall (Case #5 of World Edition). 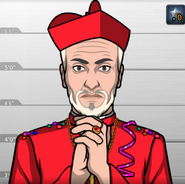 Salieri, as he appeared in The Impossible Dream (Case #6 of World Edition). 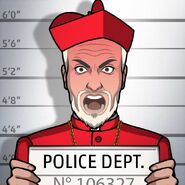 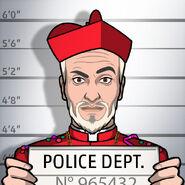 Retrieved from "https://criminalcasegame.fandom.com/wiki/Cardinal_Salieri?oldid=430183"
Community content is available under CC-BY-SA unless otherwise noted.