Captain Shafra was a suspect in the murder investigations of Captain Blackbeard in A Pirate's Death for Me (Case #22 of Travel in Time) and auctioneer Henri Pelletier in Going Once, Going Twice, Dead! (Case #25 of Travel in Time).

Shafra is a 47-year-old ship captain for the Egyptian Trading Company. He has graying black hair, a mustache, a mole under his right eye, a scar across his left cheek and wrinkles. He wears a blue collared jacket with gold buttons and beige straps. He also wears a blue and white sailor's hat adorned with a turquoise and gold winged scarab brooch.

In his first appearance, it is known that Shafra drinks rum, plays Liar's Dice and sings sea shanties.

In his second appearance, Shafra sports an ink stain on the right side of his jacket. It is discovered that he knows explosives, speaks French, takes laudanum and eats koshari.

Shafra became a suspect after Jack and the player found his compass on the Black Sparrow. He told the team that Blackbeard had stolen his compass after the Black Sparrow's crew had raided his ship. He informed the team that he was one of the most decorated captains in the Egyptian fleet and that since the attack, he had improved security on the ship.

Shafra was spoken to again about the dead albatross that he sent to Blackbeard. He explained that the dead albatross was a harbinger for bad luck and that, since the attack, Shafra's crew had held their captain personally responsible. He then revealed that he would have killed Blackbeard if he had had the chance.

Shafra was found to be innocent after the team incarcerated Lincoln Matuszak for Blackbeard's murder.

Shafra became a suspect again after Jack and the player learned that he was the auction envoy for the Egyptian Trading Company upon finding the company's auction paddle. Jack told Shafra about the murder, shocking him. Shafra then told the team that they needed to find a replacement auctioneer. He then told the team that he knew they were in cahoots with the British, prompting him to end the interrogation.

Shafra was spoken to again about his message to the victim. He revealed that he had been in an altercation with Pelletier in which the victim threatened to nullify the auction if the Egyptian Trading Company won. He told the team that Pelletier believed himself to be superior to everyone who was not white, prompting Shafra to contemplate scaring him with fireworks.

Shafra was found to be innocent after the team incarcerated Simone Severine for Pelletier's murder. Later, Shafra and Ammon Bast (representing the Egyptian Trading Company) met with Governor Uriah Haddonfield and the team (representing the East India Company) in the auction room. After Lord Quentin Montague started the auction, the East India Company won the bid, procuring the French ports and plantations in the Caribbean. 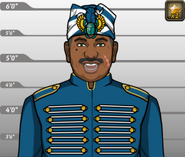 Shafra, as he appeared in A Pirate's Death for Me (Case #22 of Travel in Time). 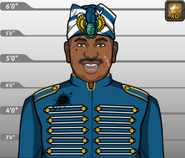 Shafra, as he appeared in Going Once, Going Twice, Dead! (Case #25 of Travel in Time).
Add a photo to this gallery

Retrieved from "https://criminalcasegame.fandom.com/wiki/Captain_Shafra?oldid=504775"
Community content is available under CC-BY-SA unless otherwise noted.