Callum is a 24-year-old artist and drunkard. He has short disheveled blond hair and brown eyes. He wears a dark brown jacket over an open-collared white shirt with brown buttons and a mauve striped tie.

In his first appearance, his tie is undone, his eyebags are heavy, and his cheeks are flushed red. Additionally, he is seen holding an empty beer bottle in his right hand. It is known that Callum has a cat, knows vampire lore and drinks red wine.

In his second appearance, his tie is tied now, he does not have eyebags anymore, he has an ink stain on his shirt and the bottle he was holding is gone. It is discovered that he eats sprinkle donuts.

Callum was spoken to again about a sketch he drew of Annabel Leigh, the victim's muse. He admitted to having feelings for Annabel and said that Edgar was only dating her to rub his superiority in his face. He said that the victim bragged about everything; tired of his attitude, he got his comeuppance by sending Edgar to break into Count Blutsauger's castle, hoping the Count would set his dogs on him.

Callum was found to be innocent after the team incarcerated Annabel Leigh for Edgar's murder.

Callum became a suspect again after Isaac and the player found his flask at the Pistols & Petticoats office. When informed of the murder, he asked who could have killed her and revealed that he had gone to school with the victim's daughter, Verushka Coldwell. He then told them that after what happened in Grim Chapel, he decided to head to Ivory Hill where the victim had hired him to be an illustrator for her magazine.

Callum was spoken to again about a bust of the victim that he had vandalized. He revealed that his job was nothing like what he thought it would be, drawing beefy bimbos and moonstruck maidens instead of detectives, monsters and robots. He then said that he defaced the bust in order to get revenge on her, claiming that it was some of his best work. He later made a scene at the airship when he begged Isaac and the player to lock him up, believing that he was cursed.

Callum was found to be innocent again after the team incarcerated Verushka Coldwell for Barbara's murder. 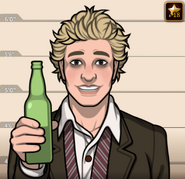 Callum, as he appeared in Graveyard Shift (Case #44 of Mysteries of the Past). 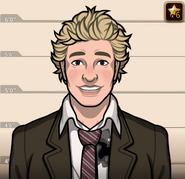 Callum, as he appeared in A Study in Pink (Case #52 of Mysteries of the Past). 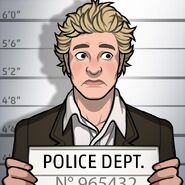 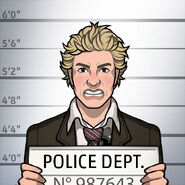 Retrieved from "https://criminalcasegame.fandom.com/wiki/Callum_Edwards?oldid=415422"
Community content is available under CC-BY-SA unless otherwise noted.