Cal was a 17-year-old troubled teen. He had messy brown hair and a pair of blue eyes. He wore a black jacket with a pin of the Crystal Skulls symbol over a plain white t-shirt.

Frank and the player found Cal impaled on a cactus along Route 76. They sent his body to Roxie, who said that one of the cactus' incredibly hard spines punctured Cal's liver, sending toxins through his bloodstream. She also noted from his bruises that Cal was pushed onto the cactus and from the bruise, she calculated that the killer weighed 210 pounds.

Cal lived with his grandfather, Jordan Stark, as his parents had died in a car accident when he was 10. However, Cal hated it when Jordan told him that he was set to inherit the family farm as he had grown uninterested in Rhine Canyon and the farm. Cal believed in aliens, hoping that they would take him away from Rhine Canyon. His best friend who had a crush on him, Missy Benedict, was then saddened when Cal said he intended to leave Rhine Canyon alone even while the two had plans to run to Ivywood together. Cal had contacted Colonel Spangler about a UFO sighting, threatening to publish it if he did not verify the sighting. Spangler took him seriously so Cal ended up staying silent. In Cal's quest for freedom, he joined the Crystal Skulls, Bubba Wyatt's biker gang. When Cal announced he wanted to leave however, Bubba told him he could not leave after witnessing some of the gang's "activities". Cal also frequently made trouble, agitating trooper Ana Herdez, who could never catch him in the act.

The killer turned out to be Jordan.

Upon admitting to the murder, Jordan said that he had found Cal trying to hitchhike on Route 76 as a way to escape the Rhine Canyon life and his responsibility in inheriting the family farm. Jordan tried to talk Cal into staying. When Cal made clear he was not planning on coming back, Jordan tried to shove him back into his truck, leading to a struggle that ended in Jordan pushing Cal into a cactus. Judge Dante sentenced him to 10 years in prison. 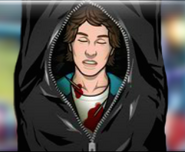 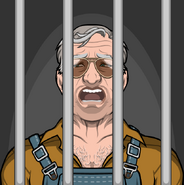 Jordan Stark, Cal's grandfather and killer.
Add a photo to this gallery

Retrieved from "https://criminalcasegame.fandom.com/wiki/Cal_Stark?oldid=491932"
Community content is available under CC-BY-SA unless otherwise noted.