Caitlin, acting as a minor character in Criminal Case, appeared during the events of Overkill (Case #22 of Mysteries of the Past).

Caitlin was a prostitute who had long ginger hair adorned with a red rose and wore lipstick. At the time of her death, she wore a light blue undershirt and pants.

Gladys Perrin reported her missing to the Squad after the murder of the supposed "Scarlet Slayer", Joseph Dante, was solved. Isaac and the player went to the park to look for her, only to find a handkerchief stained with blood. According to Viola, the blood belonged to Caitlin. Thinking that it had something to do with the Scarlet Slayer, the team talked to Madam Xiang, who insisted that she killed the real Scarlet Slayer. Furthermore, she said that the Scarlet Slayer would have struck in the public toilets if he had not died.

The team checked on the bathroom, only to find Caitlin's body, partially stripped and slashed in the stomach. They sent her body to Dick, who asked Katherine Woolf for help. Katherine said that previous victims of the Slayer were also stripped and disemboweled, meaning that the Slayer was still alive and that Madam Xiang had killed an innocent person. 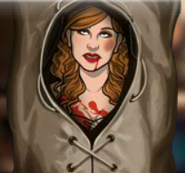 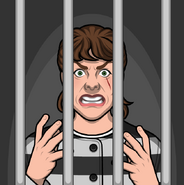 Retrieved from "https://criminalcasegame.fandom.com/wiki/Caitlin?oldid=529403"
Community content is available under CC-BY-SA unless otherwise noted.