Butcher Betty was a suspect in the murder investigation of taxicab driver Thomas Boyd in Bridge over Troubled Water (Case #31 of Mysteries of the Past).

Betty is a 34-year-old butcher. She has short black hair adorned with a red rose and wears lipstick. She dons a pastel pink dress with blue floral designs and a frilled white apron with bloodstains. Additionally, she is seen holding a bloody meat cleaver. It is known that Betty reads Pistols & Petticoats, has been to prison and uses chloral hydrate.

Betty became a suspect after the player and Maddie found Prince Porky, her lucky charm. She was questioned as to how she failed to notice the dead man hanging in the slaughterhouse, but said that she had been in the back all day. She said that she knew Thomas was a taxicab driver who drove people between the Irish and Italian sides, but said that she had never spoken to him.

Mid-investigation, Evie was chased by Betty, to which she thought the butcher wanted to kill her. However, Betty claimed she only wanted to help Evie, as she looked very distressed outside the slaughterhouse.

Betty was spoken to again about the Italian message on the cake that was given to her as a bribe. She said that she did favors for the Italians to keep them happy, but the only deal they had was delivering meat to them on time. She promised that she wouldn't get herself mixed up in any trouble.

Betty was found to be innocent after the team incarcerated Margherita Morello for Thomas's murder. But she was spoken to again after Margherita confessed during her trial that Betty acted as her accomplice. She confessed to letting Margherita hide the body in the slaughterhouse in order to keep the Italians happy. She then revealed that the Italians had asked her to hide packages for them and allowed the team to investigate the premises before she was taken into custody. Judge Lawson would later sentence Betty to 5 years in jail. 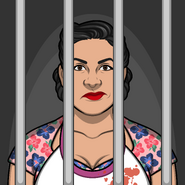 Betty, sentenced to 5 years in prison for acting as an accomplice to Thomas Boyd's murder. 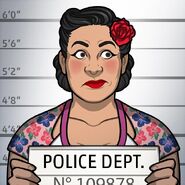 Retrieved from "https://criminalcasegame.fandom.com/wiki/Butcher_Betty?oldid=430255"
Community content is available under CC-BY-SA unless otherwise noted.