John Bradley (better known as Bulldog) was the killer of junkie Dan Broke in The Dockyard Killer (Case #4 of Grimsborough).

Bulldog is a 29-year-old drug dealer who operated in the Oakville Alley with red hair, blue eyes and a beard. He is seen wearing a gray jumper under a blue denim jacket with a skull badge on the left side. Also, he sports a nose ring, ear stretcher and a tattoo of his trademark "B" signature with a collar around it. It is known that Bulldog is left-handed.

Bulldog became a suspect when Jones and the player found a drug bag that belonged to him (per Bart Williams). Bulldog refused to cooperate with the team, prompting the team to investigate his "workplace" in Oakville Alley.

Bulldog was later interrogated again when the team found a poster whose blood belonged to Dan. Bulldog again refused to cooperate with the team and angrily told them to leave.

However, Bulldog was discovered to be the killer. He told them that he killed Dan because Dan bought drugs off of him and owed him $2,000, which caused Bulldog to get impatient when Dan did not pay him the money. Fed up with waiting, Bulldog stabbed Dan in the stomach and left him to die next to a crate at the dockyard. Judge Hall sentenced him to a minimum 20-year jail. 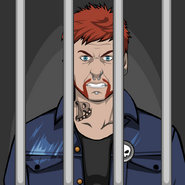 Bulldog, sentenced to a minimum of 20 years in jail for the murder of Dan Broke. 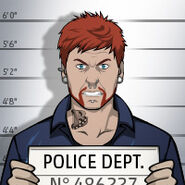 Retrieved from "https://criminalcasegame.fandom.com/wiki/Bulldog?oldid=523845"
Community content is available under CC-BY-SA unless otherwise noted.