Bubba Wyatt was a suspect in the murder investigation of teenager Cal Stark in Road to Nowhere (Case #39 of Pacific Bay).

Bubba is a 35-year-old biker and the leader of Crystal Skulls, a biker gang based in the Rhine Canyon district of Pacific Bay. Bubba has dark brown hair and mustache, and blue eyes. He dons a black vest and a bandana on his head. He also wears a pair of aviator sunglasses. It is known that Bubba eats barbecue sauce.

Bubba—leader of the Crystal Skulls biker gang—was called into questioning the instant he was caught by the PBPD team of Frank and the player trying to retrieve the corpse of Cal Stark, claiming that he wanted to give Cal "a proper biker gang funeral", but Frank vehemently dismissed the biker and opted to accompany the player in interrogating him immediately. All Frank wanted to know during the interrogation was how Bubba knew Cal, to which he replied that the victim was a junior member of the Crystal Skulls and that the gang had all the love and respect for him.

As the investigation progressed, Frank and the player found a skull bearing a message to Cal, warning him that he could not just get away from the Crystal Skulls like he said he would. Taking the message as a threat, the team called Bubba into the interrogation room a second time, where the biker then made it clear that the message only served as a friendly reminder: Cal wanted to leave the Crystal Skulls, which Bubba refused to allow under any circumstances since the victim would only be disowning his brothers by doing that.

Bubba was eventually found innocent at the closure of the case, but was found guilty of ecstasy dealing in Chief Marquez's bold attempt to calm Ana Herdez down. 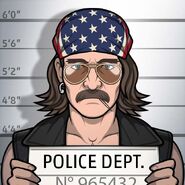 Retrieved from "https://criminalcasegame.fandom.com/wiki/Bubba_Wyatt?oldid=430200"
Community content is available under CC-BY-SA unless otherwise noted.