Bryan Vigman was the killer of student Tyler Wright in Marked for Death (Case #39 of Grimsborough).

Bryan is the 38-year-old head of security at Grimsborough University with green eyes and short brown hair which is often concealed by a purple bike helmet with black rim and straps on his head. He wears a light cyan shirt with the top button undone. On top of this he wears a yellow and gray High Visibility vest. The vest has two pockets: in the right one, he carries a permanent marker with a black tip, and on the left one, he wears a "VOTE FOR MADISON" badge. It is known that Bryan rides a bike, is a nail biter and has hacking skills.

Immediately after Bryan was called into the investigation, he claimed that he called 911 the instant he saw the corpse at the Dean's Office. Bryan was also told about an escaped convict holed somewhere in the University, and after doing research on the convict, Bryan placed posters to encourage students to call the police anonymously upon seeing him. Due to the recent murders on campus, Bryan declared curfew on the district.

When Jones and the player found a very old article about Bryan's expulsion from the Police Academy, they wanted to talk to him regarding about him not graduating from the Grimsborough Police Academy. Bryan was angry that he had to tell the team that he was going to denounce the student responsible for Bryan's dishonorable discharge, but the police academy never gave a second thought about the cannabis incident. Bryan admitted that he had to hack through a couple of smartphones of students violating curfew and even bit his nails while trying to infract students of curfew violations. Jones realized that Bryan always rode bikes all the time since he was always seen wearing a bikers' helmet.

At the climax of the investigation, evidence had exposed Bryan to have murdered Tyler Wright. As Bryan was about to be arrested, he told the team that while he was repairing his bike, a student informed him about Tyler's intent to share the term quizzes on Friendnet, which constituted an act of academic dishonesty from Bryan's point of view. Bryan did not hesitate to find Tyler at the gym and dragged him to the Dean's office in a hurry, but once inside the Dean's office, Tyler bullied Bryan, claiming that his parents would get him fired since the Dean was not present. Since Bryan could not stand people who committed academic dishonesty (cheating on exams) to avoid studying, he grabbed a paper knife and slew Tyler. Jones was appalled because academic dishonesty was not punishable by death, and in court, Judge Hall did not like how Bryan reprimanded Tyler for academic dishonesty, so the court sentenced Bryan to life in jail. 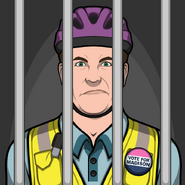 Bryan, sentenced to life in jail for the murder of Tyler Wright. 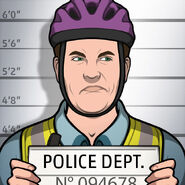 Retrieved from "https://criminalcasegame.fandom.com/wiki/Bryan_Vigman?oldid=476666"
Community content is available under CC-BY-SA unless otherwise noted.