Bruce Anderson was a suspect in the murder investigation of cosplayer Joe Turner in The Reaper and the Geek (Case #37 of Grimsborough).

Bruce is a 44-year-old B-movies actor and creator. He has short black hair and facial hair. He wears a Grimsborough Sci-fi Fantasy Festival badge around his neck. Besides that, Bruce dons a purple shirt with a green sweater over it with circles along the border. It is known that Bruce uses prosthetic glue and wears make-up.

When Irma Anderson mentioned that Bruce was her brother, Alex—a huge fan of his—was surprised and wanted to meet Bruce at any cost. He asked Irma where Bruce was, and then both Alex and the player went to meet him. After meeting Bruce, Alex could not believe it and he was so happy he could cry.

Bruce was once again spoken to after his wallet was found inside one of the crime scenes (Bus Interior) which had been closed for investigation. He explained that he was trying to hide from his fans and that he loved them, but sometimes, their love could get a little overwhelming.

When asked why his chin looked smaller on the photo found inside his wallet, Bruce got nervous and thus revealed to Jones and the player that his chin was fake. He further said that it was his trademark and no one knew about it, except Joe, who once caught Bruce as he was changing it and then tried to blackmail him and destroy his career. 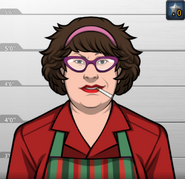 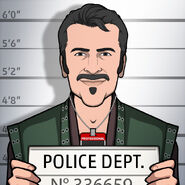 Retrieved from "https://criminalcasegame.fandom.com/wiki/Bruce_Anderson?oldid=430357"
Community content is available under CC-BY-SA unless otherwise noted.