Brooke is the 52-year old manager of Greene Casino. She has chin-length, platinum blond hair and brown eyes. She wears a light blue shirt underneath a cornflower blue blazer with the Greene Casino logo in light purple letters on the right side and a light blue handkerchief in her left breast pocket. She also wears a white diamond necklace and black glasses. It is known that Brooke uses dental floss and face cream.

Jones and the player first spoke to Brooke after investigating the scene where Samuel. She suggested that they should talk to stock trader Jack Ryan. After analyzing a surveillance camera of the casino, they discovered that Brooke was yelling at the victim and that she had threatened him with a samurai sword. When the team asked her why she did it, she said that Samuel was drunk and was causing problems. She also said that she did not threaten him with a samurai sword, but was holding an umbrella. She later came back to the team to inform them that when she opened the casino, she noticed that the samurai was back in its place and blood was dripping from it. After Harry Krane was arrested for the murder, Brooke was proven innocent.

Brooke appeared in the Additional Investigation of the case when she thought that the victim's blood was on the samurai, but upon analysis, it was proven that the blood belonged to the samurai. 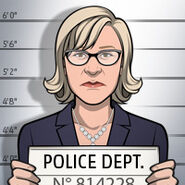