Bronwyn Peters was a suspect in the murder investigation of her husband, fantasy film director Jackson Peters, in Speak, Friend, and Die (Case #34 of World Edition).

Bronwyn is a 46-year-old casting director and wife to Jackson. She has shoulder length brown hair and white-rimmed glasses. She dons a gray shirt under a blue denim jacket, a zig-zag black and white scarf and a koru pendant. She usually carries around a file labeled 'EXTRAS' on it. It is known that Bronwyn eats pavlova, is allergic to seafood and does spelunking.

Bronwyn was first interrogated after Carmen and the player found her fingerprints on the victim's megaphone. When informed of her husband's murder, she was in a state of shock wondering who could have done it. However, she said that working together on the film, and being married on top of that was not easy. She said they managed to make it work and usually found a way to solve their problems at the rugby bar, prompting the player and Carmen to search there for clues.

Bronwyn was spoken to again about a recorded argument she had with the victim. She was surprised to know that they found out about the argument. Bronwyn explained that the victim had trouble trusting her. He recanted parts of the script behind her back. She felt the septology was meant to be their creation, but said the victim felt he needed to have complete control.

Bronwyn was found to be innocent after the team incarcerated Jermaine Waaka for Jackson's murder. However, she had to be spoken to again about the money she received about a group of youths participating in the film, and them leaving on today's date. Jack and the player decided to approach her in disguise to avoid any suspicion. Jack decided to draw information out by saying his little brother who was playing a halfling disappeared. As Jack removed the disguise, he pointed out to her the money she obtained for sending the halflings away. Bronwyn admitted she got extra money for allowing a specific group of teens to participate in the film. But she thought they were strange since they had yellow eyes and all that. However, she was also told to purchase plane tickets for them on a specific day, and said they were each going to a different continent. 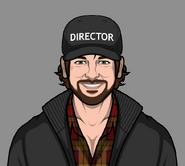 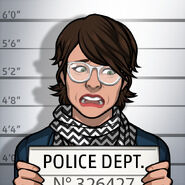 Retrieved from "https://criminalcasegame.fandom.com/wiki/Bronwyn_Peters?oldid=437497"
Community content is available under CC-BY-SA unless otherwise noted.