Bron Sklar was the killer of chess player Casper Rove in Checkmate (Case #14 of Mysteries of the Past).

Bron is a 60-year-old chess master. He has balding gray hair with a mustache and long beard. He dons a yellowish-brown collared shirt with an oil stain under a blue and brown suit jacket. He has a pocket watch in his left front pocket, and is usually seen with a smoking pipe. It is known that Bron drinks espresso, knows physics, has hearing loss and plays chess.

Bron became a suspect after the player and Isaac found a poster for his appearance at the World Exhibition. He was sad about Casper's untimely death, saying he was a pupil of his and reminiscing on their times together. The last time he spoke to Casper was the previous night to cool his nerves before the match against the Chessmaton. However, Casper needed an early night, so Bron decided to leave it at that.

Bron was spoken to again about a message he sent to the victim, suggesting chess moves to make. He explained the wrote the note to the victim because he felt he could never have beaten the Chessmaton on his own. As for his reasons why, he said he discovered the victim received his winning championship moves from an outside source, making Bron skeptical about his faith in the victim.

In the end, the evidence proved that Bron had killed Casper. After denying involvement, Bron admitted to the murder. Bron was jealous of his student's success and wanted to play against Celine Georges' chess-playing automaton, so he threatened Casper. Angry at Casper's taunting, Bron shot his heart with a bishop using the propulsion device. Judge Takakura then sentenced him to 25 years in jail. After the trial, Mayor Castletown officially opened the Exhibition. 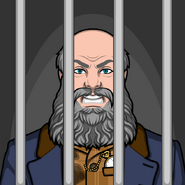 Bron, sentenced to 25 years in prison for the murder of Casper Rove. 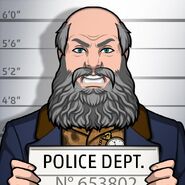 Retrieved from "https://criminalcasegame.fandom.com/wiki/Bron_Sklar?oldid=415353"
Community content is available under CC-BY-SA unless otherwise noted.