Brock Perry was a suspect in the murder investigation of Sheriff Roy Loukas in Like a Pig to the Slaughter (Case #46 of The Conspiracy) and the killer of his ex-girlfriend, Grimsborough PD beat cop Mia Loukas, in To Kingdom Come (Case #48 of The Conspiracy).

Brock is a 23-year-old truck driver with short black hair and black eyes. He is seen wearing a white T-shirt and a red piece of cloth with white and brown designs on his right hand. He also sports a bruise under his left eye and is seen holding a cigarette.

In his first appearance, it is known that Brock eats bacon.

In his second appearance, it is discovered that he knows explosives, bites his nails, drinks Bordeaux wine and uses fertilizer.

Brock became a suspect after Jones and the player learned that he had been at the pigsty where the victim was murdered. After being informed about the murder, he explained that he had gone to the farm to pick up some hogs, but nothing unusual had occurred. Jones then instructed Brock to stay away from the hogs until the investigation is over.

Brock was spoken to again about his relationship with the victim's daughter, beat cop Mia Loukas, after Mia told the team about it. He revealed that the victim had always been against him and had been the one to drive Mia away from Spring Fields due to his pigheadedness. He then told the team that his love for Mia would survive anything.

Despite Roy's disapproval and hatred towards Brock, he was found to be innocent after the team incarcerated Lorenzo Sims for Roy's murder. But he later visited the precinct to talk to Gloria and the player about Mia. He told the team that Mia had rushed out of the precinct to be alone and was clearly upset. When asked about where she might have gone, he said that Mia had wanted to see the place where her father died for herself. This prompted Gloria and the player to reinvestigate the pigsty.

Brock became a suspect again after Gloria and the player found the chocolate bear he had given to the victim. Gloria broke the news to him about Mia's death. Questioning how it could have happened, he told the team that he was supposed to meet Mia at the café. He then broke down in tears. Later on, he made an attempt to see Mia's dead body in the police station, only to be stopped by Gloria and Martine.

Brock was spoken to again about his breakup with the victim. He revealed that Mia had broken up with him after he suggested that they made their relationship public after her father's death. Mia branded him heartless and broke up with him. The night they broke up, Brock got drunk and blew up Mia's stuff. The next morning, he knew that he needed to get back with Mia, so he asked her to meet with him. He then found out (per Gloria and the player) that Mia had been killed.

This time around, it was proven that Brock was Mia's killer. Admitting to the crime, Brock said that he was approached by some people from a nearby vineyard to hire him to kill the player, telling him that once the player had died, Mia would want to stay in Spring Fields permanently. He resisted a few times, but gave in to the offer the night before after Mia had broken up with him. He then built a fertilizer bomb out of materials given to him and then rigged the player's car such that the bomb would be activated upon the turn of the ignition key. Unfortunately for Brock, Mia had turned the car on instead, killing her. Judge Powell sentenced him to life in prison. 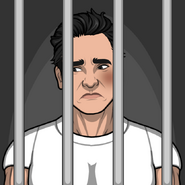 Brock, sentenced to life in prison for the murder of Mia Loukas and attempted murder of the player. 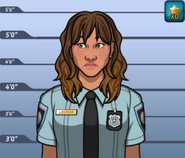 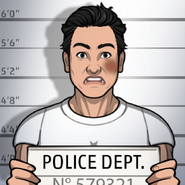 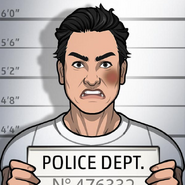 Retrieved from "https://criminalcasegame.fandom.com/wiki/Brock_Perry?oldid=536593"
Community content is available under CC-BY-SA unless otherwise noted.