Bridget was a 17-year-old plumber. She had short blonde hair, wore goggles, and had stains all over her face. She wore a stained beige jacket with brown and caramel colored patches, a gray dress and a blue scarf. Additionally, she was seen holding a monkey wrench. It is known that Bridget had food poisoning.

Bridget became a suspect after the player and Isaac found her wrench in the sewers, close to the hidden stash of guns they also came across. She did not have any information about Mario's murder, nor did she see anyone down in the sewers recently. As for the weapons, she believed it belonged to one of the gangs, but she preferred not to take any sides due to not being either Irish or Italian, and chose to stay clear of them.

Bridget was spoken to again about a box of bullets which had traces of her drain cleaner on it. She said she was planning on selling the bullets, since plumbing did not pay that much. However, the victim caught her and accused her of taking sides in the gang war, and on top of that threatened to lock her up unless she told him where they came from, though she refused due to not wanting involvement in the war.

Bridget was found to be innocent after the team incarcerated Kieran Quinlan for Mario's murder. But was later spoken to again about the whereabout of Seamus O'Neill, who recently escaped prison. She said she had seen him messing with the crates, but hid from sight. Though she did not see anything, she heard him mutter about the marketplace, so Isacc and the player decided to search there for his whereabouts.

Bridget's headless body was found on a burning Crimson Bridge. Per Dick, the victim was decapitated with a sharp blade. Moreover, he found the powder covering the candy Stucco Wafers on the body, and since Bridget had no Stucco Wafers in her stomach, he concluded that the killer ate Stucco Wafers.

Constable Ramirez found Bridget's head in a children's playground and reported it to Maddie and the player. According to Dick, there was flea powder between the jaw and the cheekbones of the head, and since Bridget did not have fleas on her body or head, it was the killer who had fleas.

Bridget was born to Sadie Smith, who gave her up for adoption. They had then reunited, although Sadie often used Bridget to steal morphine to fuel her addiction. Nurse Jemima Hatchett grew tired of Bridget stealing morphine from her hospital, putting several security measures into place to no fruition. Newspaper boy Timmy Tanner had been taken under Bridget's wing, although she abandoned him during the gang war. Irish gangster Dermot McMurphy made Bridget choose a side, while Italian gangster Antonio Dante caught Bridget spying on the Italians for the Irish.

The killer turned out to be Timmy.

Timmy admitted to the murder, but said it was an accident. While hiding on the burning bridge, someone had grabbed him from behind. Not recognizing who the person was, Timmy attacked them with his machete, only to realize that he had decapitated Bridget afterward. Panicking, he took her head to the playground. 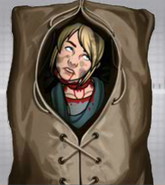 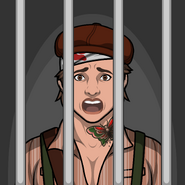 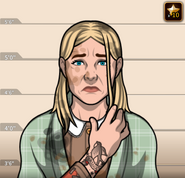 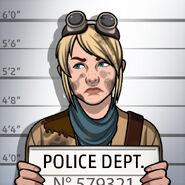 Retrieved from "https://criminalcasegame.fandom.com/wiki/Bridget_Baker?oldid=472195"
Community content is available under CC-BY-SA unless otherwise noted.