Brice LeBeau was a suspect in the murder investigation of media mogul Rufus Murlock in Six Feet Down Under (Case #35 of World Edition). He was later revealed to be the killer of SOMBRA scientist Marshall Metcalf in Out of the Blue (Case #36 of World Edition).

Brice is a 29-year-old French treasure hunter. He has short blond hair and stubble and has a gold medallion around his neck. He dons a gray and black diving suit with several articles of diving equipment.

In his first appearance, it is known that Brice drinks Shiraz and scuba dives.

In his second appearance, he is seen with a cigarette in his mouth and it is discovered that he knows Krav Maga and uses sunscreen and Morse.

Six Feet Down Under

Brice became a suspect after he was seen on the news, which reported that he broke into the victim's property. When Carmen asked why he broke into Rufus' property, he said he could do as he wished since the victim was dead. He explained he was trying to examine a shipwreck, but Rufus refused saying he did not want anyone meddling in his affairs. Because of that, Brice was convinced that something fishy was going on with the victim.

Brice was spoken to again about his equipment being found in the shipwreck on the victim's property. He said he was not going to let Rufus, dead or not, get in the way of his treasure hunting expeditions. However, he was unable to find what he was looking for due to a hangover from the previous night.

Brice was found to be innocent after the team incarcerated Veronica Salter for Rufus' murder.

Brice became a suspect again after the player and Jack found his cigarette on the crime scene. He said he dropped it when he saw the team's boat, not wanting to get caught trespassing again. Jack was surprised to see him since the island was uncharted, but Brice said he came across the island by chance. When informed he should not be there due to the murder, Brice said he was going to return to Sydney, but Jack informed him he was not allowed to leave due to becoming a suspect.

Brice was interrogated again about him finding the hidden lab in the volcano, which he was recorded going in several times. He said he was just simply exploring and it caught his interest. But he was disappointed to find that there was no valuable treasure. He explains the only reason he went back was to get his expensive sunscreen that he mistakenly left behind. He insinuated again that he never came across anyone, but Jack decided to take Brice to Dupont until the investigation was over.

Despite his pleas, the evidence proved that Brice was Marshall's killer. After denying involvement, Brice admitted he killed Marshall. Brice was scuba diving on the island when an insane Marshall approached him at the beach and tried to inject him with his syringe. Brice panicked and injected Marshall with it in self-defense. Judge Adaku authorized Brice’s extradition to France to be tried and sentenced. 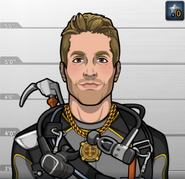 Brice, as he appeared in Six Feet Down Under (Case #35 of World Edition). 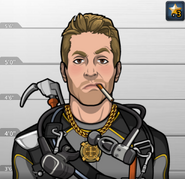 Brice, as he appeared in Out of the Blue (Case #36 of World Edition). 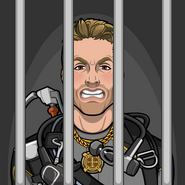 Brice, extradited to France to face trial for the justifiable homicide of Marshall Metcalf. 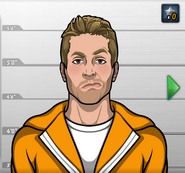 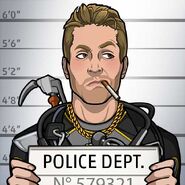 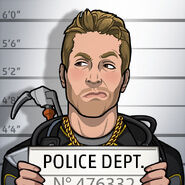 Retrieved from "https://criminalcasegame.fandom.com/wiki/Brice_LeBeau?oldid=529802"
Community content is available under CC-BY-SA unless otherwise noted.