Brett Nolan was a suspect in the murder investigations of movie producers Horace Foster in Wild Wild Death (Case #33 of Pacific Bay) and Tyler Snakes in Dead Carpet (Case #38 of Pacific Bay).

Brett is a 28-year-old actor with blond hair and green eyes.

In his first appearance, Brett wears a leather cowboy hat and a red neckerchief. He sports a brown vest over a blue plaid shirt, and dons the badge of an infamous cult on the left side of his vest. It is known that Brett wears cowboy boots, plays poker and drinks tequila.

As of his second appearance, Brett dons a black tuxedo accompanied by a red rose on the right and the aforementioned badge on the left. Additionally, he wears a black top hat. It is discovered that he has seen A Puff of Death and takes Nevrax.

Brett found himself in trouble after Frank and the player found a bottle with the actor's message on which the Utopian symbol fascinated Frank, which was enough to warrant analysis by Russell. Russell made it clear that the triangular symbol was a sign of the Utopian Cult of Ivywood—a cult promising endless fame and eternal life for a fee. In addition, Russell could not help but notice Brett as a member of this cult, so Frank and the player opted to talk to the lead actor of Horace's The Ornery Die Last, but not without Russell pointing out Brett as the Utopians' spokesperson.

Brett was told by the Utopians that he was not supposed to give Horace the blue bottle (filled with a so-called elixir), but he did so in order to prove to the producer that they were to be friends until the end. The actor waited for an opportunity to work for Horace, but felt that the honor would be short-lived due to the victim's death.

Brett would be approached a second time after the team found a horse statue with the Utopian symbol upside down at a food truck with the actor intending it to be an insult of sorts. Brett stated that an upside down version of the Utopians' symbol would represent their enemies, thus making it clear that Horace was an enemy to the cult. The Utopian faithful would finance Horace's movie as long as the Utopians were permitted to provide the script for Horace, but the late producer refused to use the script furnished by the cult. This drove the cult mad, prompting Brett to issue Horace a statue with the triangle upside down in response to the producer's refusal to use the Utopian-approved script.

Brett was found innocent after an act of dishonesty proved to be a strong motive for the murder, but his problems were far from over. Frank and the player found a cryptic card in Horace's mansion which Russell then deduced was left in there for the producer's soul to be judged for betraying the Utopian Cult—grounds for the team to quiz the actor. Brett was not pleased with the player removing the card from Horace's mansion as he firmly believed that the producer needed to be judged. He also admitted that he stepped afoot in the mansion only to drop that cryptic card inside. Since the Utopians took Horace's refusal to use a Utopian-approved script for The Ornery Die Last, Brett left the cryptic card in the mansion to remind the late producer's soul of his crimes against the Utopians.

At the climax of the conversation, the actor dropped a bomb when he outed the fact that Russell was once a fellow Utopian, but betrayed them years ago. Frank felt that this was out of line, so he suggested the player to keep tabs on Brett until further notice.

Brett found himself in trouble after Amy and the player found a poster of him inside the TV room of the Ivywood Awards Theater, which the Utopians had reserved for executing their brainwashing attack at the ceremony. When asked about the attack, Brett claimed that he did not know about it and that the Utopians like to use his face on propaganda. After Amy told the Utopian to not play dumb, Brett told the team that it was about the Guiding Light leading the departed souls back to Earth. However, when told about Tyler Snakes's death, he was shocked, backing up his claim that the cult never told him anything.

Brett was interrogated again after Amy and the player pieced back together a picture of him and the victim fighting about something. The actor explained that Tyler hated his acting and that he should have learned from Dick Shakespeare in A Puff of Death. However, Brett still did not understand what Tyler had meant after watching the movie twenty times. The actor went on to explain that Tyler criticized him in that he had no charisma and the Utopians needed a new face to represent their propaganda. As a result, Brett was suffering from severe anxiety, but claimed that Nevrax did not help.

Despite their disputes, Brett was found innocent of murder. 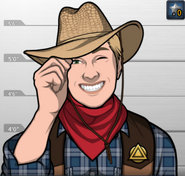 Brett, as he appeared in Wild Wild Death (Case #33 of Pacific Bay). 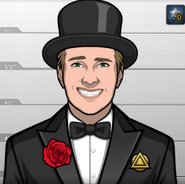 Brett, as he appeared in Dead Carpet (Case #38 of Pacific Bay). 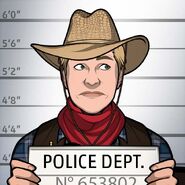 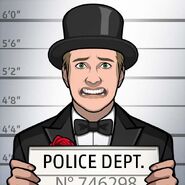 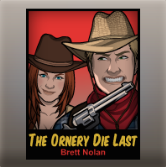 Brett, along with Eva Grant, featuring in a poster promoting The Ornery Die Last.
Add a photo to this gallery

Retrieved from "https://criminalcasegame.fandom.com/wiki/Brett_Nolan?oldid=409177"
Community content is available under CC-BY-SA unless otherwise noted.