Bradley Fields was a suspect in the murder investigation of tennis player Stephanie Griff in Game, Set, Murder (Case #40 of The Conspiracy).

Bradley is a 45-year-old woodworking teacher at Grimsborough University. He has short, graying-black hair, stubble, and a bruise on the left side of his forehead. He wears an orange and gray plaid shirt under a brown apron emblazoned with "Brad's Workshop". In his apron pocket, he carries a silver wrench, a red box cutter, a pencil, a ruler, and a flathead screwdriver. Additionally, he dons safety goggles on his forehead and yellow earmuffs around his neck. It is known that Bradley uses heat cream and orders Kangaroo.

Bradley became a suspect after Jones and the player learned that the murder had taken place in his workshop. He identified the victim as Stephanie Griff and explained that she was one of his students on a tennis scholarship. He informed the pair that the victim spent most of her time on the tennis court, prompting Jones and the player to investigate the court.

Bradley was found to be innocent after the team incarcerated Gunnar Burns for Stephanie's murder. 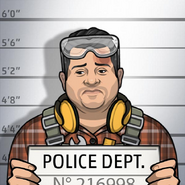 Retrieved from "https://criminalcasegame.fandom.com/wiki/Bradley_Fields?oldid=435682"
Community content is available under CC-BY-SA unless otherwise noted.