Brad Raybury was the killer of astronaut Tom Nelson in Dead Space (Case #43 of Pacific Bay).

Brad, at 23 years of age, is a PhD student who studies astrophysics at Innovation Valley College and works as an intern in PASA for the purpose of his thesis. Brad has short brown hair and blue eyes. He is seen wearing a black t-shirt with green streaks and a right pocket that houses his pencil, pen, and space satellite badge. In his left hand, he carries his textbooks and wears a watch. He also has a red dust stain on his shirt. It is known that Brad is right-handed, eats space food and knows astrophysics.

Brad was first interrogated when Amy and the player found his thesis on the Rhine Canyon training facility. He was shocked at hearing of Tom Nelson's death, stating he was one of the greatest scientists on earth. When asked about his opinion on the killer, he replied stating that whoever killed Tom had to be even smarter than him.

When the team found a pie chart written by Brad stating that the victim would be the main reason he would fail his PhD, he was interrogated once again. He goes on how the victim kept information from him and he was charged with doing small tasks like getting space food. When Amy suspected him of being the killer, he replied saying that Tom would be of much more use to him, at least until his thesis was completed.

Brad was found guilty of first-degree homicide not to mention unauthorized use of military property, grounds for Colonel Spangler to face court-martial for allowing the Pacific Bay Police Department unauthorized access to the War Room for the purpose of seizing the murder weapon, which was identified as a laser gun. However, his arrest was plausible for General Freeman to exonerate Spangler due to the cooperation he demonstrated in helping the team nab another killer.

Brad thought the team had no proof that he killed Nelson, but Amy told the candidate to drop the attitude by presenting the evidence incriminating him, proving that the player was a fast learner when it came to science. Brad bowed down by admitting that he shot Nelson, but never knew that the murder weapon was fully functional. All Brad wanted to do was to play a prank on Nelson by pointing the laser gun at him, but in spite of Brad assuming that the laser gun was a toy, it killed Tom, and Brad was aghast to know about the hole the laser gun caused. Amy made it clear that a homicide is a homicide, so she stepped aside to allow the player to ship Brad before the Honorable Dante.

In court, Brad stated that he did not like Tom keeping all research files out of Brad's reach. Brad also had to state that the murder was an accident: if Tom had told Brad not to play with the gun, he would have went to Mars via space shuttle Examiner-1. Given that the murder was an accident, Judge Dante gave Brad an eight-year jail sentence with unannounced parole eligibility contingent on inmate behavior. 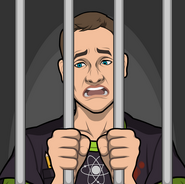 Brad, sentenced to 8 years in jail with unannounced parole contingent on inmate behavior for the accidental murder of Tom Nelson and unauthorized use of proprietary military equipment. 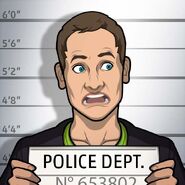 Retrieved from "https://criminalcasegame.fandom.com/wiki/Brad_Raybury?oldid=490064"
Community content is available under CC-BY-SA unless otherwise noted.