Brad Belinsky was a suspect in the murder investigation of director Margaret Hatchman in Deadly Legacy (Case #36 of Pacific Bay).

Brad is a 36-year-old bald-headed lion tamer with brown eyes and a black mustache. He sports a golden brooch on the left side of his leopard-style tank top, and the emblem of an infamous cult on his right. He is also seen carrying a training hoop in his right hand and a whip in his left hand. It is known that Brad drinks wine and knows Latin.

Brad was first brought into the investigation when Hannah identified him as the owner of the lion Amy and the player captured. After being denied access to see the lion whom Brad called "Brutus", Brad defended the lion by telling the team how friendly he was and how he could do tricks with a hoop. The lion tamer also admitted that Brutus was still a wild animal and was smelling blood coming from the victim, despite her not being a threat. He claims that the action was just a part of nature and that the team should take action on the killer rather than on Brutus. When asked if he had left the victim unconscious, Brad claimed that he was home the night before, cleaning a wine glass.

Brad was approached again when the team found a chew toy resembling Margaret that belonged to the lion. He defended himself saying that what he did was not training Brutus to kill the victim, but rather, he made the doll to get back at her for mistreating the two of them. Brad went on to say that Margaret treated them like slaves (i.e. throwing stuff at Brutus's cage when she was in a bad mood), and she would not let the lion tamer feed Brutus until he learned some Latin phrases.

Brad was found innocent after an act of greed happened to be the driving reason for the murder, but went under fire after he was found by Amy brainwashed to kidnap Russell. Brad was ordered to bring Russell to the symphony room, but Amy pleaded with the lion tamer to let the profiler go unscathed, which he did. And so Amy and the player entered the symphony room on Russell's behalf, only to find brainwashing plans in the belfry. 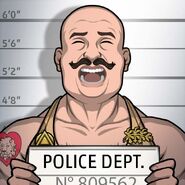 Brad in a promotional still of Dead Carpet.
Add a photo to this gallery

Retrieved from "https://criminalcasegame.fandom.com/wiki/Brad_Belinsky?oldid=409178"
Community content is available under CC-BY-SA unless otherwise noted.