Boris "The Bull" Chiswick was a suspect in the murder investigation of rockstar Ian Devine in The Saddest of All Keys (Case #3 of The Conspiracy).

Boris is a 67-year-old bass player. He has medium-length gray hair, a beard and a mustache. He wears a maroon shirt under a black vest jacket with studded epaulets and a skull with wings design on the right side of his jacket. Additionally, he is seen holding a red bass guitar. It is known that Boris drinks Gold Stag whiskey and has an Irish Wolfhound.

When Jones and the player found Boris playing in the music store, they talked to him regarding his broken bass guitar. Boris said that it was tradition for the band to smash instruments as a celebration of the start of the tour. When he was informed that Ian had died, Boris felt sad, knowing he could not play with all his friends anymore.

Later, the team found Boris's defaced poster of Ian in the music store. Boris said that Ian had insisted that his bass was too loud and that he couldn't hear himself on stage. This disagreement went so far as for Ian to threaten to fire Boris from the band. He said that his bass was essential for the band and that The Henge wouldn't be The Henge without his bass. Later on, Boris's Irish Wolfhound, Fitz, approached the team angrily, scaring Jones. He then came to take Fitz away, saying that he would have come sooner if he had not thought that the wolfhound was Kevin St Kevin's.

Boris was found to be innocent when the team found Kevin guilty for Ian's murder. Later, Cathy and the player wanted to find Boris so that they could take Alex to meet his idol. They located Boris's passport in the music store and took Alex to the airport to meet him. Alex told him that he was one of his biggest idols, inspiring him to make music. Boris offered him an autograph and thanked the team for returning his passport and arresting Kevin for the murder. 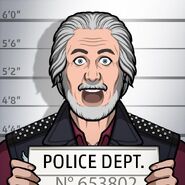 Retrieved from "https://criminalcasegame.fandom.com/wiki/Boris_Chiswick?oldid=437038"
Community content is available under CC-BY-SA unless otherwise noted.