Bone of Contention is a case featured in Criminal Case as the twenty-sixth case of The Conspiracy (Season 5) and the two-hundred fifty-seventh case overall. It takes place in the Maple Heights district of Grimsborough.

Gloria and the player went to the "Happy Paws" dog shelter upon receiving the manager's reports of a murder. They collected the body of Penny Farrell, who was strangled to death.

During the investigation, the team found out Penny was the assistant to the Mayor, Martha Price. Further into the investigation, Celine Dernier reported that her dog, Plopsie, had been kidnapped in the dog walking park. Later, Rita asked the player for help in babysitting Sammy Turner before she left to ask Martine instead. The team then found enough evidence to arrest dog walker Kitty Young for the murder.

After slipping up, Kitty admitted that she occasionally kidnapped dogs and waited for their owners to offer a reward before returning them in order to make more money. When Penny found out and confronted her about her modus operandi, they had a fight, ultimately ending with Kitty knocking Penny out and strangling her with a dog leash. Judge Powell sentenced her to 15 years in prison.

Post-trial, animal control agent Benjamin Fetcher told Gloria and the player that a man had almost died of respiratory failure after touching one of the Demon Fish. The team went to the park to find the fish the man had caught, but only found the man's jar with no fish inside. Per Martine's analysis of the water in the jar, the fish the man had caught was a fertile female Demon Fish known to secrete a powerful paralytic neurotoxin. Martine also said there had been multiple cases of respiratory failure resulting from contact with the fish. She also deduced that the fish had spread out from the middle of the Grimsborough river.

The team then went to Mayor Price to inform her of the findings. She told them that there had been a recent report from the area where the fish originated. They then found the file, which (per Cathy) proved that someone had deliberately released the fish into the city by blowing up a Xerdan cave wall right next to the sewer system. The team then updated Mayor Price regarding their findings.

Meanwhile, Zoe Kusama and the player helped Rita adopt a puppy. Afterwards, Zoe proceeded to volunteer in the shelter to relieve her anxiety. After all the events, Martine told the team that she and Rupert were working on an antidote to the toxin. The team then resolved to figure out who released the fish into Grimsborough waters.

Kitty Young
Add a photo to this gallery 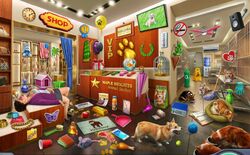 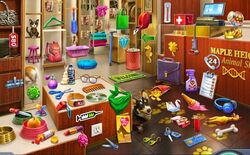 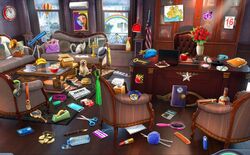 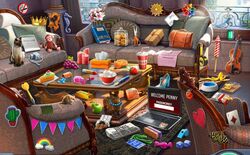 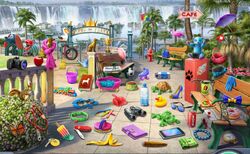 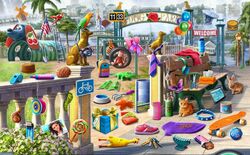 Doggie Playground
Add a photo to this gallery

Start a Discussion Discussions about Bone of Contention