Randy "Bodhi" Green was a suspect in the murder investigation of aid worker Donna Sandover in Bad Medicine (Case #19 of World Edition).

Bodhi is a 35-year-old yoga teacher. He has messy blonde hair and facial hair. Bodhi dons an orange-collared kameez and has two necklaces around his neck, and two pins on his right breast. It is known that Bodhi drinks chai tea and knows the Bhagavad Gita.

Bodhi became a suspect after the player and Carmen found his business card inside the victim's wallet. He said he had met Donna at the hostel where he lived, afterwards she came to his yoga classes. He liked how gung-ho she was, getting her hands dirty with Rising Hope and helping other people in need.

Bodhi was interrogated again by the player and Jack after his DNA was found on a tapestry given to the victim. He said the message was from the Bhagavad Gita, hoping to teach Donna she should take people's advice, not their possessions. When asked if she stole something from him, Bodhi replied saying she stole his father's watch. Though she used it to purchase food and medicine for earthquake victims, he felt stealing was bad karma. Jack thought that would make him angry, but Bodhi said retribution is up to a higher power.

Bodhi was found to be innocent after the team incarcerated Dr Sumati Misra for Donna's murder. But he was spoken to again by the player and Lars regarding a recording of Guru Padmasana. Bodhi felt the Guru was an inspiration, saying he was the light in the world of darkness. However, he did not know anything about him other than what he goes by, but he did say the Guru was leading a kirtan in Mumbai soon. 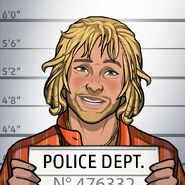 Retrieved from "https://criminalcasegame.fandom.com/wiki/Bodhi_Green?oldid=522060"
Community content is available under CC-BY-SA unless otherwise noted.