Blood in the Water is a case featured in Criminal Case as the thirtieth case of The Conspiracy (Season 5) and the two-hundred sixty-first case overall. It is the final case to take place in the Maple Heights district of Grimsborough.

Jones and the player rushed to the animal control facility upon hearing of Mayor Martha Price's murder from Benjamin Fetcher. They then collected her body, half-eaten by the Demon Fish in the tanks.

Mid-investigation, Jones had to give a speech in a press conference regarding the Mayor's death after the media caught wind of the murder. Later, a drunken Lola Vallez told the team that Martha was a "bitter hag". They then found enough evidence to arrest the Mayor's cousin, scientist Ernest Emerson, for the murder.

Upon admitting to the murder, Ernest also admitted that he released the Demon Fish into the floodwaters in the first place "for science". After he heard that Martha was planning to exterminate the fish, he snuck into the animal control facility to release them again. When Martha walked on him, he tried to fend her off with a screwdriver before pushing her into the fish tank. Judge Powell sentenced Ernest to life in prison for the murder and for indirectly killing multiple people through the Demon Fish.

Post-trial, the DreamLife device had informed the team that Mortimer Pickering would be picked up at 6pm that day. Cathy then rigged Rupert's watch to act as a communication device to the team: pressing its crown once would alert the team of his safety and pressing it twice would allow him to make an emergency call to the office. After they told Chief Parker that everything was in place, Gloria told the team that Mortimer had gone to the park. She and the player then found him sightseeing in the park and promptly took him to Rupert so they could perform the switch.

Meanwhile, Jones and the player met interim mayor Joe Warren, who was planning to relocate the Demon Fish to a San Diego aquarium, and apprehended Patricia P. Harris for stealing the mayoral stamp. After all the events, Cathy and the player were able to see a DreamLife agent pick Rupert up from the Glitz Hotel to take him to the dome.

Ernest Emerson
Add a photo to this gallery

Rupert Winchester
Add a photo to this gallery 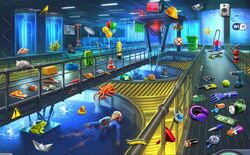 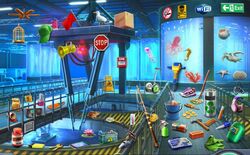 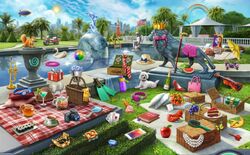 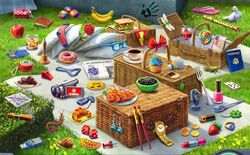 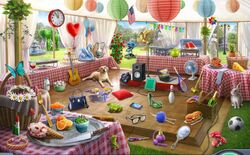 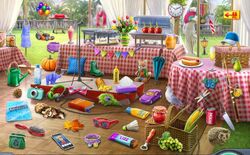 Buffet Tables
Add a photo to this gallery

Start a Discussion Discussions about Blood in the Water