Blake Cooper was a suspect in the murder investigation of his daughter, cabaret dancer Dinah Cooper, in Hanging by a Thread (Case #24 of Pacific Bay).

Blake is a 70-year-old puppeteer of African-American heritage. He sports brown eyes, balding white hair, a bushy stubble of the same color, and wears a blue and orange face paint. He dons a white shirt underneath a black waistcoat along with a green bow tie. The waistcoat features a pocket on the right which consists of puppet strings. In addition, he is at times shown controlling a puppet worked by strings using his left hand. It is known that Blake knows mechanics and eats candy apples.

Blake is the father of the late Dinah Cooper and the grandfather of Louie Cooper.

Blake found himself in trouble after the player found a scratched picture of him and his daughter during the first trip to The Abigail by Frank Knight and the player. The player digitally identified the man scratched out of the picture as Blake, after which Frank realized Dinah scratched Blake's face intentionally due to issues she had with him. The nature of the picture warranted Frank and the player to talk to Blake.

Blake was not pleased when Frank and the player had to talk to him regarding Dinah since neither of the two spoke to each other in years. Dinah being a cabaret dancer didn't go undetected as Blake labeled her as a loose cannon due to Dinah running away from Blake's care in pursuit of a cabaret dancer career albeit she gave birth to Louie in the process. What angered Blake was that Dinah would not let him see Louie with his own two eyes, not to mention how undisciplined his daughter was.

Moments after Dr. Russell Crane took over Frank's place for the remainder of the investigation (due to psychological requirements of the case), Blake's nightmares stacked up after Dr. Crane and the player found a warning card to Dinah from Blake during the team's second trip to the Carnival's storage room. Blake admitted discomfort when he had to write the message to Dinah about him not being allowed to see Louie, but what made him uncomfortable was the fact that Freddie Alonzo treated Louie to a couple of candy apples (per Roxie Sparks "The Puppeteer", Dinah's killer, ate candy apples) instead of him. Blake made it clear that family problems do not warrant violence under any circumstances, and took some time to admit to Dr. Crane and the player that he was a bad father to Dinah, but not without stating that being a good grandfather to Louie was the only way he could redeem himself from years of poor treatment to Dinah.

The player proceeded to close Jazz Town's chapter of terror thanks to Dr. Crane's psychological expertise, and Blake was vindicated from the murder charges. Later on, with the help of Amy Young, Blake managed to get the proof he needed to claim custody of Louie, thus sealing his path to redeem himself. Besides that, Amy and the player managed to seize a flyer of Dinah's fame and fortune as a cabaret dancer to remind Louie what Dinah had to do to make ends meet. With closure achieved, Blake could now take care of Louie without any further hindrance. 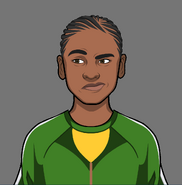 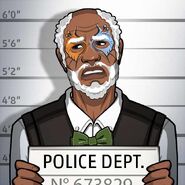 Retrieved from "https://criminalcasegame.fandom.com/wiki/Blake_Cooper?oldid=518643"
Community content is available under CC-BY-SA unless otherwise noted.