Blair is the 57-year-old manager to the research station. He has short black hair and frostbite on his nose and cheeks. He dons a navy blue winter coat with a badge of Antarctica on it lined with animal fur, and has polarized glasses tucked on it. It is known that Blair eats beef jerky and goes kayaking.

Blair became a suspect after the player and Jack found his skin cells on a bloody wool hat on the crime scene. He was shocked to hear of her death, saying the hat was his and he lent it to the victim. When informed of Ernest Emerson ranting on about the death being caused by a saber-toothed tiger, Blair said not to pay any attention to him. He said the victim was a bit naïve like everyone at the station, mostly due to the isolation of the South Pole. Not to mention it was tough for supplies since their regular supply ship ran aground a few months back, so people could go a bit stir crazy.

Blair was spoken to again about a romantic movie he watched with the victim. He said there was no actual romance involved with him and the victim, he just watched it with her to keep her company, and they were just friends. Julia reminded him of his daughter, which explained why he got along so well with her, especially considering the fact that he does not see his family that often due to working in the Arctic.

At the climax of the investigation, the evidence revealed that Blair was Julia's killer. When Jack and the player arrested him, Blair showed that he suffered from dissociative amnesia, according to Marina. Marina then interrogated him, where she helped him recover from the amnesia. He then admitted to the crime. Blair felt alone while working at the station and thought that he and Julia were made for each other, so he could not stand when Julia rejected him. Moved by rage, he split an oar in half, hit Julia in the head with it and then stabbed her with the sharp end. As Blair could not be tried due to his mental state, Marina kept him in custody and suggested psychological treatment for him. 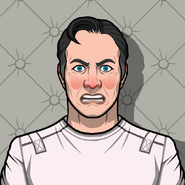 Blair undergoing psychiatric incarceration for the murder of Julia Lloyd. 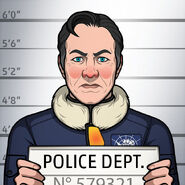 Retrieved from "https://criminalcasegame.fandom.com/wiki/Blair_Carpenter?oldid=408068"
Community content is available under CC-BY-SA unless otherwise noted.