Captain Edward Teach (better known as Blackbeard) was the victim in A Pirate's Death for Me (Case #22 of Travel in Time).

Blackbeard was a pirate and the captain of the Black Sparrow. He had blue eyes and long, black hair and facial hair. His beard was fashioned into braids with seashells. He wore a brown coat with a red strap as well as a matching brown hat with a red base and golden lining and buttons. He had a gun strapped around his torso. It is known that Blackbeard had scurvy.

Jack and the player witnessed as Blackbeard collapsed dead in Crow's Nest tavern after eating a poisoned orange, instead of being killed in a sea battle in the original timeline. Janis deduced that the orange the victim bit was tetrodotoxin-infused. As tetrodotoxin, which was a venom found in pufferfish, was 1200 times more poisonous than cyanide, Blackbeard died in a matter of seconds. Janis also found traces of rum, which the victim had not ingested before his death. This meant the killer drank rum.

Blackbeard was poisoned by an orange bought from fruit vendor Ezola Alldred, who also had a romantic relationship with the victim. However, she ended the relationship after knowing his numerous affairs. Blackbeard sentenced Black Sparrow crewman Rags to walk the plank as the victim caught him rifling his gold. Captain Shafra of the Egyptian Trading Company sent Blackbeard a dead albatross as a symbol for bad luck to take revenge for Black Sparrow's stealing of his ship's cargo, which resulted to his crew holding him personally responsible. Black Sparrow pirate Mary Read challenged Blackbeard a duel to prove that she was better than him. Crow's Nest tavern owner Lincoln Matuszak exploited Blackbeard's murder to boost his tavern's profits.

The killer turned out to be Lincoln.

Lincoln said that he had overheard Blackbeard finding the map to Rackham's lost treasure. Knowing that he was telling the truth, Lincoln planned to steal the map from Blackbeard's pocket and kill him afterwards. He executed the plan, injecting poison into an orange which he gave to Blackbeard after the latter ordered a drink. Refusing to disclose the treasure's location, Lincoln was handed over to the authorities. 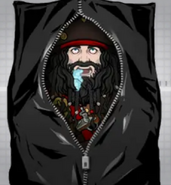 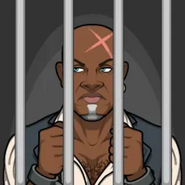 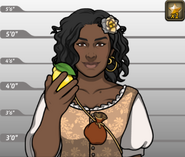 Ezola Alldred, Blackbeard's ex-girlfriend.
Add a photo to this gallery

Retrieved from "https://criminalcasegame.fandom.com/wiki/Blackbeard?oldid=523719"
Community content is available under CC-BY-SA unless otherwise noted.