William "Billy" Thompson was the killer of firefighter Otis Kidd in In the Line of Fire (Case #3 of Mysteries of the Past).

Billy is a 27-year-old firefighter for the Concordia Fire Brigade. He has brown hair and mustache, and burn marks on his face. He dons an unbuttoned, soot-covered firefighter outfit lined with gold buttons. It is known that Billy uses cocaine toothache drops, plays dice games and drives an automobile.

When the player and Maddie first arrived on the scene, Billy was there to greet them and say the fire was just put out. However, he also reported that another firefighter, by the name of Otis Kidd, was found dead in the evidence room. On top of that, the fire brigade had reason to suspect arson was involved, so Maddie and the player began their investigation into Otis' death, which turned out to be murder.

Billy became a suspect after Maddie and the player found his and the victim's Medals of Honor at the fire station. He was shocked to hear it was murder, saying he was like a brother to him. When asked if he had any enemies, Billy said he was a hero to Concordia so he could not think of anyone who would want Otis dead.

Billy was spoken to again after the team was given reports that he broke into the Commissioner's home. He said he was there because the Commissioner's daughter owed him money. When asked why, he said the money was given to the victim, who spent it on his girlfriend. He explained that Otis was addicted to playing craps, he lost often and owed money to some people. Billy helped loan the money to him, but whatever money he made from that was spent on Adelia and not given back to him. He just wanted his dues, especially since it was thanks to him the victim got a job on the fire brigade in the first place.

In the end, the evidence revealed that Billy was behind Otis' murder. Billy denied involvement first but soon admitted to the crime. He had saved Otis from ruin by loaning him money and getting him a job at the fire brigade. When Otis started dating Adelia, he turned his back at Billy, often disparaging him and spending his money to buy gifts for Adelia. When Otis disparaged him again while working at the police station, Billy shot him in the back with a revolver he had previously stolen and placed his body in the flames. Judge Takakura sentenced him to life in jail. 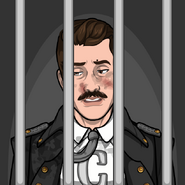 Billy, sentenced to life in prison for the murder of Otis Kidd. 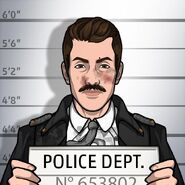 Retrieved from "https://criminalcasegame.fandom.com/wiki/Billy_Thompson?oldid=415323"
Community content is available under CC-BY-SA unless otherwise noted.